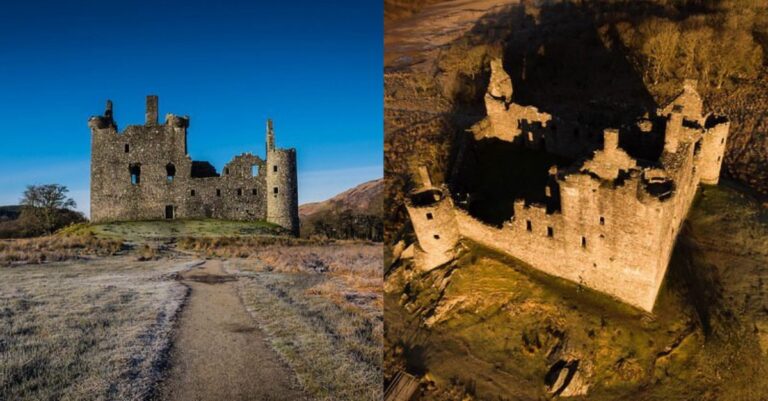 Kilchurn Castle is situated in Loch Awe, Scotland on a small island. It comprises of structures which were built from the 15th century to the 17th century. The history of this castle is a long and vibrant one decked with eerie tales.

In a charter dated March 1449, the first record of the castle exists called “apud Castrum de Glenurquhay,” which means “at the castle of Glenurquhay.” The building was designed to resemble the Campbells of Glen Orchy’s ancestral home who later became the Earls of Breadalbane.

The original structure was a five-storey tower house (that contained a cellar, private chamber, prison and hall) as well as a courtyard. Sir Colin Campbell, first Lord of Glenorchy, initiated the tower’s building in the 1400s. He also encompassed an outer wall to the courtyard to raise defenses.

The second son of Duncan Campbell, Colin, was granted Glenorchy in 1432 at the north end of Loch Awe. This deed was carried out to ensure Colin’s loyalty following his older brother’s unexpected death. Colin, the 2nd Lord, later added the “Laich hall”. The hall was built in the courtyard prior to Colin’s death in 1513 in the Battle of Flodden.

The primary castle was further extended during the 1500s by adding a hall to the south side. Similarly, more extensions to the castle took place in the 16th and 17th centuries. Colin, the 6th lord, added four important angle-turrets on top of the tower house. He was also responsible for relocating the Campbells of Glenorchy to Balloch, in Perthshire from Kilchurn. In 1583, Colin the 6th lord passed away.

In 1689, Sir John Campbell of Glenorchy, 1st Earl of Breadalbane, saw to it that the castle was converted to a garrison stronghold. The tower house was then altered so as to accommodate officers. A barracks to house 200 men was built on the north side of the courtyard. The barracks block still remains intact to date and according to Historic Environment Scotland it is the oldest surviving barracks on the British mainland.

During the 1715 and 1745 Jacobite uprising, a government garrison took control of the castle. It proved to be rather useless as an outpost. The Campbells were living in Taymouth Castle by 1740 and hence attempted to sell off Kilchurn to the government. However, they failed.

One of the most interesting incidents in Kilchurn’s history was when it was struck by lightning in 1760. It was badly damaged and left abandoned. To date, the turret’s remains from the top the tower lay scattered upside-down in the center of the courtyard marking the fateful event.

Following the lightning strike, no renovations were made to the castle and it fell to ruin. Soon the roof caved in and the ruins became a source for free construction materials for nearby landowners.

The water level of Loch Awe dropped in the early 19th century and the island became connected with the shore making it the first time in history that the castle was accessible by land. Currently, the castle still remains standing on the long peninsula.

Historic Scotland is currently in charge of the care of the castle. It is open for visitation during the summer and is considered a nationally significant site. Kilchurn Castle is also in lieu of being a monument of the United Kingdom.

Many people who visited the castle claimed to hear ghostly wails crying for help in the ruins. Legend has it, the cries are of a child who was locked away in a high room up in the castle at one point.