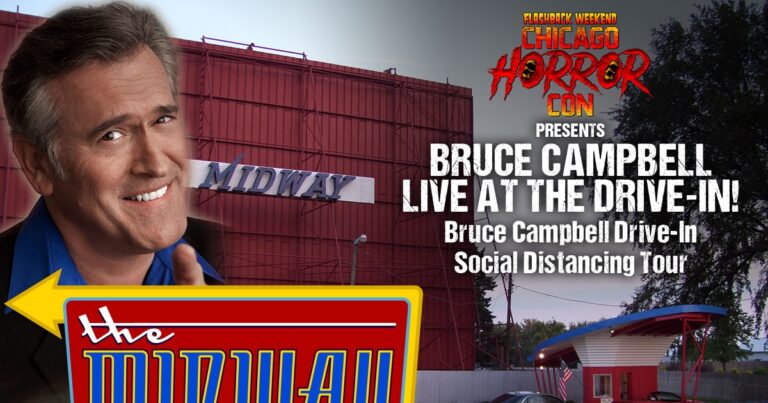 Bruce Campbell has a history of hosting legendary Q&As. In the past few years, these have become almost as iconic as the films that he’s starred on.

During this time, the Evil Dead actor has shown off is well-known wit while also delving into quite a lot of behind the scenes stories from his career. Now, the people of Dixon, Illinois, will be able to experience that first hand.

A newly-announced part of his Drive-In Social Distancing Tour will be at the Midway Drive-In Theater in the city, which will accept up to 250 vehicles for the event. Taking place on July 10 and July 11, the Q&A session will have Campbell in-person, as well as a projection of him on the movie screen for fans to enjoy.

However, the fun doesn’t stop there. Alongside the Q&A, Campbell will be sitting with fans to watch all three of his original Evil Dead films, each of which was directed by Sam Raimi. On the first night, he will air 1987’s Evil Dead II: Dead by Dawn and 1993’s Army of Darkness.

The following night, Bruce Campbell will air the 4K re-release of the original Evil Dead, which has become a cult classic since it was first released. While Campbell has appeared in countless films during his career, the Evil Dead franchise is responsible for his fame and is often what he’s synonymous with.

Throughout the movies, there will be vintage drive-in concession ads to help give fans an idea of what it was like when the original movies were released. In addition, there’ll be a few other surprise attractions throughout both evenings.

While VIP fans will be able to take photos with Bruce Campbell, it’s expected that they’ll have to stay six feet apart for social distancing requirements. Tickets for the event are already on sale.