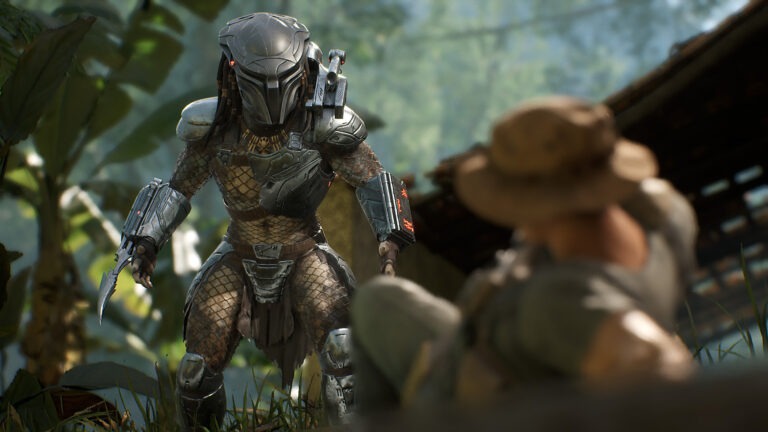 Predator: Hunting Grounds is set for release on PS4 and PC via the Epic store in just a couple days on April 24th, and Sony is looking to entice audiences even more with a spicy new trailer.

Can you stand toe-to-toe with the Predator and live to tell the tale? Sony asks fans for the new Predator title which features asymmetrical multiplayer gameplay akin to the hugely popular Dead By Daylight and Friday the 13th franchises.

You can play as either the Predator itself or one of an unfortunate group of marines who have been caught in the trophy hunting alien’s sights. It is your job as the marines to simply make it out alive to the rescue chopper, but the Predator may have other plans for you and the rest of your squad.

It appears that the Predator will come equipped with an absolute arsenal of weaponry and equipment, including active cloaking, thermal vision, and the ‘smart disc’ which you can catch a glimpse of in the trailer. The player can select one of three different playable classes which each implement unique playing styles, including the Scout, The Berserker, and the Hunter.

As the marine, you also have the choice of several character classes as well as a fully customizable loadout, which can, in fact, turn the tide against the Predator if you play as a team.

Illfonic has also previously mentioned that AI enemies will feature in the game, potentially becoming a hindrance on both the marines and Predator teams alike.

The game was unveiled by Sony at their State Of Play presentation back in May of last year and it is being developed by Illfonic Studios who were also responsible for Friday the 13th so they do already have a hand in the ‘Juggernaught’ style of gameplay.

It has also been confirmed already that the title will support cross-platform play between PS4 and PC.

Check out the trailer below, and let us know what you think! Or if you’re picking up the title on release comment and tell us how it is!