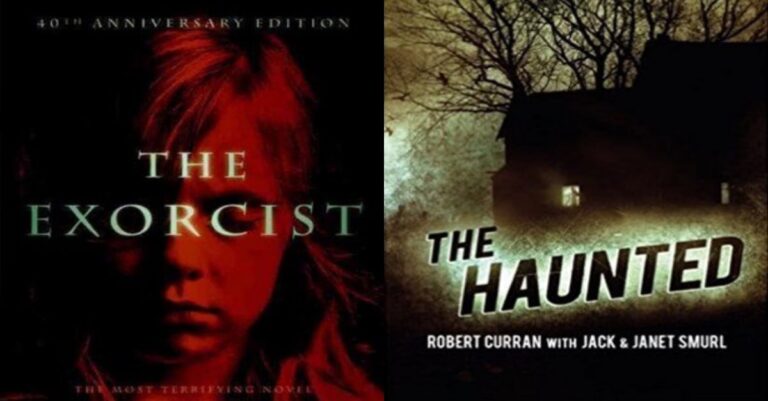 Horror books are far too underrated for their own good. Just about everyone chooses to watch horror movies instead of settling in with a good horror book. However, even though horror movies are all the rage, nothing beats a grand non-fiction horror book based on real-life hauntings. The amount of terror trapped between those pages is quite unlike any special movie effects or camera tricks. Read on to find some of the best titles of real-life hauntings.

The Haunted: One Family’s Nightmare

This book discusses the famous account of the Smurl Haunting of Pittston, Pennsylvania. For over ten years, the Smurl family claimed that their home was possessed by a demon during the 70s and 80s. Clergy members, demonologists, local authorities and paranormal experts were al approached. Even the famed paranormal investigators, Ed and Lorraine Warren, made an appearance. Robert Curran describes the emotional and physical abuse the family endured for years and even helped write the script for “The Haunted” which was a made-for-TV movie.

The Uninvited: The True Story of the Union Screaming House

LaChance penned down a first-hand account of the Union house haunting in Missouri. In the early 2000s, LaChance and his children fell victim to endless demonic experiences. The family had recently moved into a house that used to be a butcher’s shop on Cedar Street in Union, Missouri. Although they did receive warnings from the realtor, they moved in anyway. Soon began the paranormal activities, furniture moved on its own, the religious artefacts in the house were defaced and unnatural screaming sounded from the house. LaChance tells his story through these pages as well as the tale of the tenant who moved in after he and his family fled the house.

This book is ghost story, memoir and travel guide all in one. Colin Dicky highlights all the ghost tours that he went on, the places he travelled to in search of the paranormal and sheds light on society’s obsessions with the supernatural. His journey through the United States had the sole purpose of finding haunted places and discovering the dark history behind them.

The Demonologist: The Extraordinary Career of Ed and Lorraine Warren

Everyone who has a keen interest in demonology has definitely heard of Ed and Lorraine Warren – the demon fighting heroes. The Amityville Haunting came to public light due to the Warrens. They even appear figure in stories such as the Enfield Poltergeist and The Haunting in Connecticut. Many of their cases are brought to light in this book. Their dependence and reliance on religion is one of the highlights of the read.

Hostage to the Devil

Viewers of the Netflix documentary “Cross to Bear” which is based on Malachi Martin – an esteemed writer on demonology and a Catholic priest. In the 60s, Martin moved from his Ireland to New York and is the author of 17 books. Many of his books talk about his exorcisms and experiences with demons. This book particularly discusses the exorcisms he practiced and oversaw during the 60s and 70s. Many of these exorcisms led the modern day belief and view of demonic exorcism.

America’s most famous haunting, brought to public fame by Ed and Lorraine Warren, the Amityville Haunting, is a terrifying read. On November 13th, 1974 in the dead of night, Robert DeFeo killed his whole family with a shotgun. He claimed that the demonic voices in his head told him to do so. About a year later, the Lutz family moved in. They were chased out within a month due to the horrifying experiences they went through. This book brings to light the true nature of their suffering in clear cut horror.

The Myrtles Plantation: The True Story of America’s Most Haunted House

This book narrates the story of America’s most haunted house in Louisiana. The story claims that the spirits are those of vengeful Native Americans as the plantation was constructed on Tunica burial grounds. As many as 12 ghosts are said to haunt the house and up to 10 murders have been attributed to the place. Kermeen’s book explores the morbid history of the house as well as the current sightings given that the plantation is open as a bed and breakfast now.

Deliver Us from Evil: A New York City Cop Investigates the Supernatural

An NYPD veteran for 17-years and a Roman Catholic who investigated scenes of demonic possessions, Ralph Sarchie was a practicing demonologist. He dared claim that he made use of the relic of the True Cross during his exorcisms. The novel is far better than the Sony Pictures adaptation of his memoirs.

Fun fact: probably the scariest movie of all time was based on true events. The book recounts the tale of the exorcism of Roland Doe. His name is a pseudonym and his real identity was never disclosed to the public. He was a 14-year-old boy who lived in St. Louis in the 1940s. Blatty put together the novel by making use of some anecdotes from the exorcist’s notes which involved the original exorcism. He incorporates his own version of events adding a mother and daughter living in Georgetown.

A Natural History of Ghosts: 500 Years of Hunting for Proof

This book is written from the point of a view of a skeptic and an explorer. Over 500 years’ worth of ghost stories, hauntings and occult tales are tracked down and collected by Clarke. The ghost stories mentioned rarely ever have a real explanation. Some of history’s most famous personalities make an appearance in the adventures of Clarke such as Harry Houdini and Adolf Hitler.

Most of the horror movies that are based on real stories are adapted from books. When one can actually get their hands on the real deal instead of the a movie adaptation, why settle on cinematographic effects? This list of harrowing and chilling novels will have your terror meter beeping off the rocks.