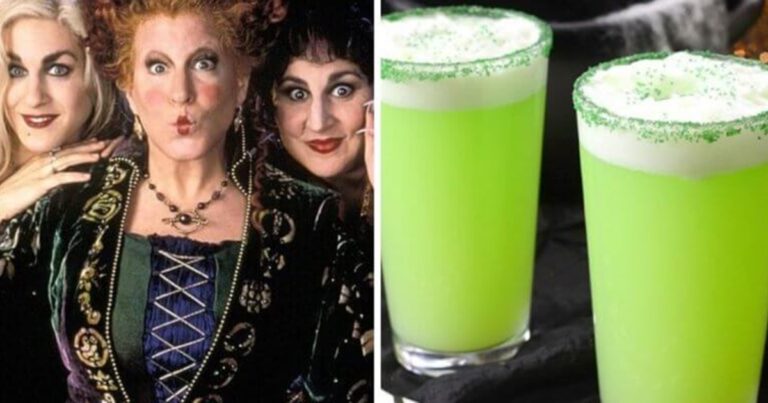 Since being released, Hocus Pocus has continued to have cult-classic popularity. Throughout this time, there’s been a lot of merchandise released, and that’s even mentioning speculation on which Sanderson Sister people prefer. However, one important thing that needs to be looked at is the witch’s brews that the characters actually drink.

Naturally, this has led to many people wondering what the drinks are actually made from, which has been fuelled by the fact that there’s no official recipe. In turn, this has led to quite a large number of people creating recipes of their own. While many of these are hit or miss, there are a few that taste much better than the rest. This one created by D23 is one such contender.

Despite the great taste, the Hocus Pocus-inspired witches brew is much simpler to make than many people would think. It only needs three ingredients; chilled lime sherbet, a liter of club soda, and 12 ounces of green apple soda. You can also switch the green apple soda for Hawaiian Punch or another bright green drink if you’re not a fan of the taste.

Putting the ingredients together is just as simple. The two sodas must be mixed into a pitcher before adding scoops of the lime sherbet. This should then create a foam similar to the one seen in the film. Once this is done, the sherbet should be allowed to melt for a few seconds before mixing it into the punch.

With that, you’ve got a witches brew fit for the Sanderson Sisters within a few minutes. Depending on how sugaring you want it, you may need to adjust how much of the sherbet you add to the drink. Once you’ve got the right amount, however, you’ll be feeling like you’re in Hocus Pocus, not just a fan.

TIP – You can swap the green apple soda with other bright green drinks like Hawaiian Punch.