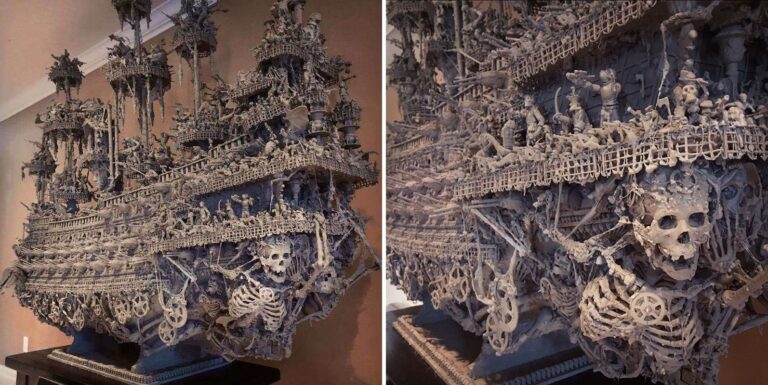 When it comes to creating art of the undead it doesn’t get much cooler than a ghost ship crewed by the damned, and that is the exact notion that tattoo artist and sculptor Jason Stieva had when he began commissioning his finest work yet.

He named it Leviathan- Ark Of The Apocalypse, and with the model measuring in at 8 ft high, 7.5 ft long and over 2.5 ft wide we can see why the moniker is justified.

It’s not just the size of this behemothic boat that’s impressive though as Stieva went down to the most minute detail with this creation, including the in-depth features of the monstrous crew which had to be handcrafted individually.

The piece as a whole took Stieva over 14 months to complete, and he says that he lost count of how many hours were poured into this thing. When interviewed about his creation Stieva stated that the ghost ship was “the most daunting project I’ve ever worked on and will probably ever create.” he goes into further detail by giving us an insight into the intense craftsmanship that was required “Just severing the army heads alone and sanding the back of each to be certain they would sit flush once applied with tweezers took weeks”.

Stieva is predominantly a tattoo artist and runs his own tattoo shop called Sinful Inflictions which is based in Whitby, Ontario and it is here where Stieva met the client to whom the Leviathan now belongs, the customer also had Stieva tattoo the image of a ghost ship across his chest.

Detailed vid of main deck some upper tiers and crows nest? “Leviathan” Ark of the Apocalypse #15 in my Gothic Times Series..Created this piece a little over 4 yrs ago taking around 14 months to complete…kinda lost track of hours spent workin on her..The thing with Leviathan is a great deal of work was spent on the side you don’t even see..went a lil nuts workin on this one! The motliest band of savages to have ever sailed the high seas!!! @jasonstieva @sinful_inflictions Song by Fever Ray..If I had a heart.. #leviathan #arkoftheapocalypse #sculpture #assemblageart #skulls #bandofsavages #timepiece #gothictimes #art_motive #art_daily #art_collective #artsanity #taxidermy #oddities #details #sullenclothing #togetherwerise