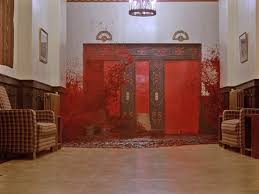 A couple in Iowa, have found themselves living a real life version of The Shining when events reminiscent of the famous blood scene from Kubrick’s seminal film occurred in their basement.

In the film, based upon the novel by horror master Stephen King, the doors of an elevator at the cursed Overlook Hotel open to reveal a wave like torrent of blood that then spills out into the corridor.

In events eerily reminiscent of this scene the couple found in October of this year ( like a gory halloween surprise) that the basement of their home was filled with blood which had manifested out of nowhere.

The red liquid which also contained animal remains was eventually traced back to a nearby meat processor which had spilt its awful load into drains that had backed up and overflowed.

In a suitably King-esque detail the family revealed that alongside struggling with insurance companies they were also disapointed to find that a racecar bed they had in store for their toddler was ruined by being soaked with blood. How creepy is that?