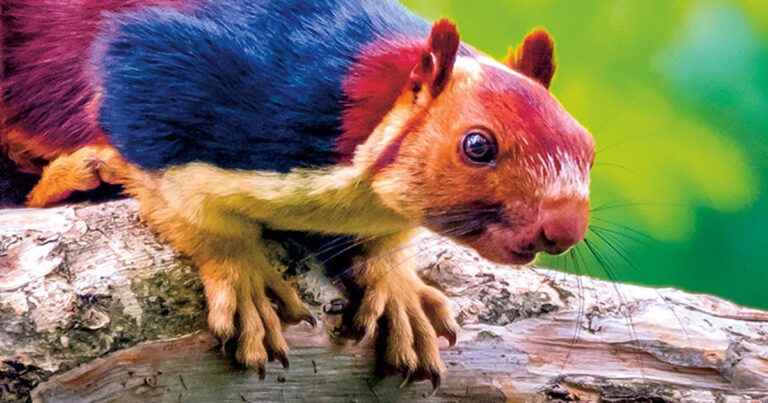 Giant rainbow squirrel. They’re three words that nobody expects to hear together. However, it’s the nickname of a squirrel species found in India that’s as terrifyingly adorable as the name might suggest. Technically called the Malabar Giant Squirrel, the species is also known by the names Ratufa Indica and Indian Giant Squirrel.

Regardless of the name used, the squirrel is quite an interesting species. The main reason it got its nickname is that its coat of fur typically has a wide range of colors. These then help it to blend in with the background to keep it safe from predators. By all accounts, this has been quite successful, with poachers being the only large threat to the animal.

To blend in, the squirrel usually presses itself against a surface and contorts its body to blend in as much as it can. The majority of the animals grow to be 30 inches long, which equates to about two-and-a-half feet. That’s larger than a cat or small dog. Some have even been known to be three feet long.

How the giant rainbow squirrel communicates is also as cute as you might expect, as they make a chittering sound to talk. Like the majority of other squirrels, it’s a herbivore and can typically be found moving around during the daytime. As most reports claim, some of their favorite foods are jackfruit and passion fruit.

It’s also been noted that the species isn’t too afraid of humans and don’t seem to run off when approached. However, poachers have somewhat conditioned them to be skeptical when they are approached. Despite this, many have been known to come up to humans and interact, possibly in an attempt to get food.

Alongside this, the giant rainbow squirrel has come into human establishments in the past in their search for food, although this is as rare as you might think.