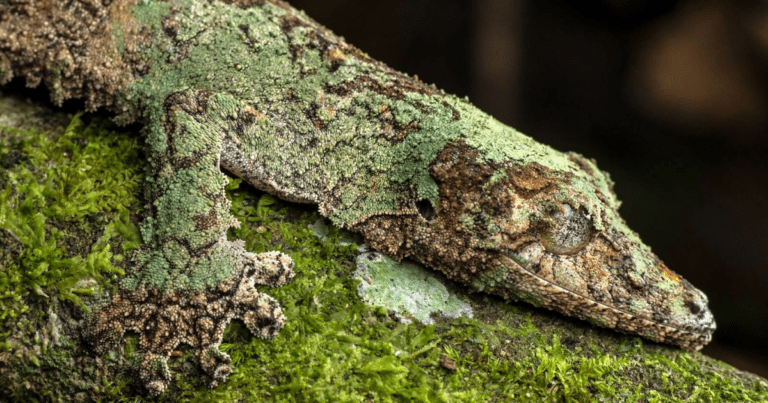 In the wild, animals rely on various tactics and techniques to aid their survival. While some tend to make themselves big and attack anything they see as a threat and others run away from predators to their safety, these creepy Geckos are a little different.

These geckos are by far the greatest masters of disguise, and they will do everything in their power to blend into nearby woodland in attempts to become invisible to any potential threats.

Named the Madagascan mossy leaf-tailed Gecko (Uroplatus sikorae), these skilled disguisers tend to hide out on branches, with some making them almost unrecognizable.

They’re incredibly talented when it comes to sneaking, making them a danger for their prey, and very tricky to find and catch for their predators.

They alter their colors to match their surroundings giving them the best chance to successfully hide from other wildlife. If you’re not an expert like most of us, even humans have a hard time pointing these little creatures out.

The Madagascan mossy leaf-tailed gecko also strongly resemble dragons with their speckly, rough skin, without the wings, of course.

Eagles, owls, snakes, and rats are just some of the gecko’s primary predators, meaning the animal must stay on high alert at all times if it wants to survive in the wild.

Darkness is this Gecko’s best friend, giving them the opportunity to hunt for themselves. Small insects and invertebrates are the main diet for the mossy leaf-tailed gecko.

Surprisingly, and quite unfortunately, the Geckos predators aren’t the animals biggest threat, that would be humans.

Due to human activity and constant growth of population, the Geckos habitat is becoming diminished, and although they’re not considered endangered as of now, that could quickly change in the near future if changes aren’t made.

They’re also captured and sold for humans to keep as exotic pets, further endangering the species.

What do you think of these creepy hidden creatures? Make sure to let us know your thoughts in the comments.