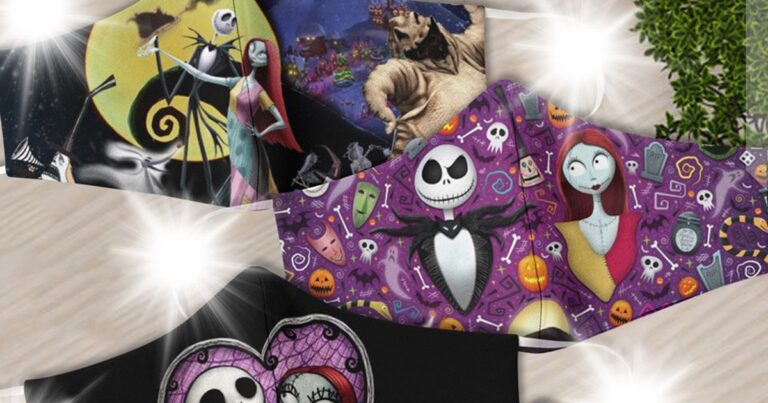 Tim Burton’s The Nightmare Before Christmas is a much-beloved classic. Since being released it’s developed a cult-like reputation, with fans re-watching it on a yearly basis. This has spawned further popularity as younger generations quickly fall in love with the film. Naturally, this has spawned quite a significant amount of merchandise.

In addition, fans of the movie have regularly taken inspiration from the film to make their own creations. Now, Nightmare FM has released a range of PPE masks featuring characters from the film. However, it’s not just individual characters that adorn the masks. Instead, the images look similar to shots from the movie.

As a result, Nightmare Before Christmas fans can keep safe in style as soon as they have some of the movie’s most famous scenes on show. The majority of the masks feature Jack Skellington, the lead character from the movie. Alongside featuring the character on his own, he’s included with his love from the film, alongside a few other characters.

According to the masks’ listings, which are available on Shopping-Everyday.com, the masks are machine washable and the design shouldn’t fade. This should mean that they’ll be reusable for quite some time. Though they only come in one size, the manufacturer notes that they’re adjustable, so buyers should be able to customize them to an extent.

The listing also notes that each mask will be shipped in between five and ten business days. However, the actual delivery time may vary, depending on where it’s being shipped to. Regardless, they should arrive well before Halloween, which may be when most Nightmare Before Christmas fans may want to buy them for.

Each of the masks is currently on offer for around $15, though this doesn’t include applicable delivery fees. Being on sale, it could be worth buying them relatively quickly.

Which is your favorite?