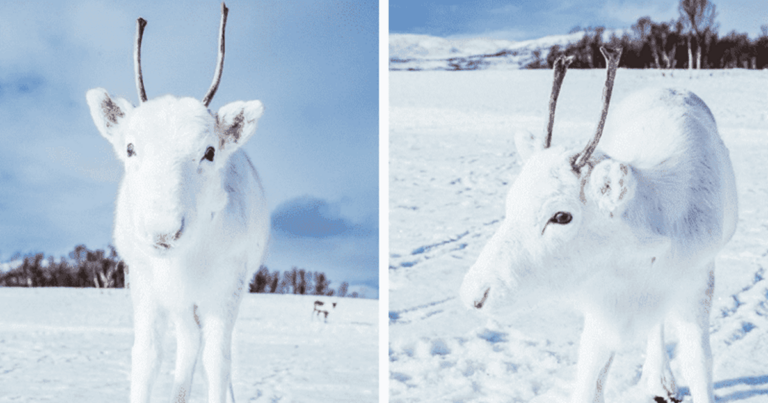 There are quite a few animals that many people believe to just be mythical. However, the vast majority of these have at least some basis in reality. Then there are the animals that many people wouldn’t believe are real until they’ve seen them up-close-and-personal. This is the case with this white reindeer, which some people believe live in the imagination of Christmas fans.

Despite this, they do exist, although they can be quite difficult to find. Mads Nordsveen, a photographer based in Norway, managed to take some pictures of one of the animals in the wild. As seen below, the calf reindeer was spotted when Nordsveen was hiking in the mountains with his friends.

Because of the vast amount of snow covering the floor, the 25-year-old photographer initially didn’t notice the white reindeer. It was only when the calf was close that he actually noticed it and started taking photographs. Even up-close Nordsveen says that they almost blended into the snowy background.

However, the animal still looked majestic in the photos that he managed to take. After a few minutes, though, the photographer noted that the calf ran away to its mother. With how far away the larger animal was, Nordsveen wasn’t able to get many pictures of the animals together.

The photographer has also noted that the encounter was a “fairytale moment.” This is especially true given that Scandinavian lore and traditions, a white reindeer is considered a sign of good luck. Because of how rare the animals are, many people believe that their white fur is because of albinism.

However, this isn’t the case. Instead, it’s the result of a genetic condition that removes pigment from the fur. Regardless of the cause, the end result looks amazing. In future Christmas movies, these should be the reindeer seen with Santa’s sleigh.