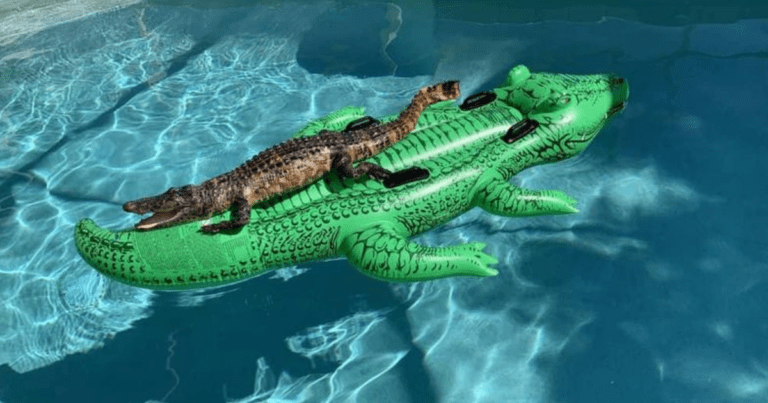 Spotting alligators in the sunshine state of Florida is nothing to be surprised about, but this certain gator was trending over social media for its bizarre antics.

Earlier this year, an alligator was spotted in an Airbnb in Miami, lounging atop an alligator pool float without a care in the world.

The visitor was spotted – by Dave Jacobs as was visiting Florida to attend a wedding – just a day before in a lake outside the family holiday home.

Due to the alligator mating season – which is fast approaching – these reptiles have had to be rescued from numerous unusual places, and while this particular alligator story is hilarious, others have been found in unique places too, according to the local wildlife manager.

Alligators courtship starts in early-mid April, and they begin mating anywhere between May and June.

After this post began trending, thousands of people shared their thoughts (and jokes) on the humorous alligator. Some praised the reptile for finding the right partner, while others claim she thought she found her mom.

In recent times, people have shared plenty of stories relating to alligators invading their personal space or trespassing on their properties, and the most recent comes from a tweet from Wink News on Twitter.

If you’re a Florida-native and are yet to see alligators being mischievous in an area near you, pregnant gators usually lay eggs in late June to early July, with hatching taking place in between mid-August and early September, so you should not have too much longer to wait.

It’s always nice to see wildlife acting human and doing everyday things most of us do.

Have you ever seen an alligator doing something they normally shouldn’t be? Do you have stories to share? Be sure to share your experiences with us in the comments.