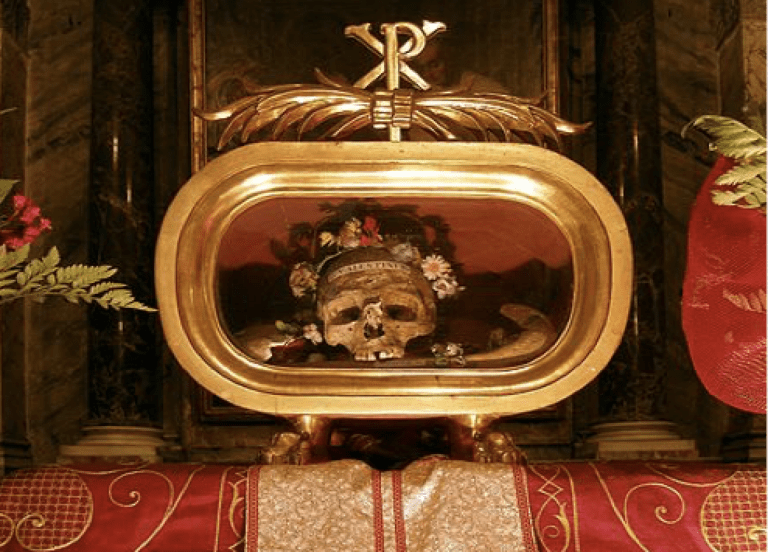 My Sweet and loving Valentine…

Whilst it may be a celebration of  love (or counting money if you happen to be in the confectionery or card making business. Wahey!) there is more than a little of the darkness in the origins, history and folklore around Valentine’s day to be of interest to the fan of horror.

From animal sacrifices and whippings to murders and beheading, here are a few facts about Valentine’s Day for those who are ‘in love’ with horror. Bring these up in conversation whenever someone starts to bore you about cards and chocolates.

Ah, the Romans. Always to be relied upon to add some kind of crazy blood curdling mischief into history.

Long before St Valentine became associated with its more ‘saintly’ festival of love, the Romans  (and possibly pre-Romans) already celebrated a festival between the 13th and 15th of February, which many believe Valentine’s Day evolved from.

Unlike today’s soppy incarnation however, the Roman celebration was far more visceral and comes across more like something from an A24 movie than a film on the Hallmark channel.

Known as the feast of Lupercalia the festival involved sacrificing goats and dogs, skinning them and then using  strips of the hide to whip naked women.

The women, it is believed, would voluntarily queue up for this whipping as the bloody and admittedly rather kinky practice, was believed to make the women more fertile.  The festivities also involved a ‘lottery’ in which men would draw the name of their ‘match’ for the festival from a jar like some awful mix of Hunger Games and a reality TV show.

Whilst the Christians might have had a little less nakedness, that did not diminish their penchant for blood and violence, with even the saint who gave his name to the festival having come to a less than sweet end.

St Valentine it is believed, was executed for going against orders to secretly marry soldiers (to other people, as in officiating the marriages, he wasn’t going around marrying loads of soldiers, what do you think was, Roman?) which was a no,no as it was believed that remaining unmarried and staying away from women made the soldiers better fighters.

As punishment for this defiance Valentine was given the most gift card friendly punishment imaginable.

He was savagely beheaded.

Luckily, this detachment of head from shoulders wasn’t going to stop him looking pretty for the occasion as his skull, with a crown of lovely flowers is on display at the church of Santa Maria in Cosmedin, Rome.

Though interestingly, for all of the places claiming to have skeletal remains of St Valentine to be accurate he would need to have had more bones in his lifetime than Chasey Lain.

( BTW If you’re reading this Netflix, there’s a horror movie premise in there somewhere, all of the bones coming together at once to create some kind of odd shaped Valentine creature,  ‘The Bones of St Valentine’ could be a seasonal hit. Call me!).

Finally there’s the myriad of unfortunate, tragic and downright bloody events that have marred the history of St Valentine’s Day over the years.

I’m not going to list them here, but from The St Valentine’s Day Massacre of 1929 to the The U.S. school shooting at Marjory Stoneman Douglas High School in 2018, the date has long been associated with gruesome events which those with the time and inclination could easily look into. If that’s your kind of thing.