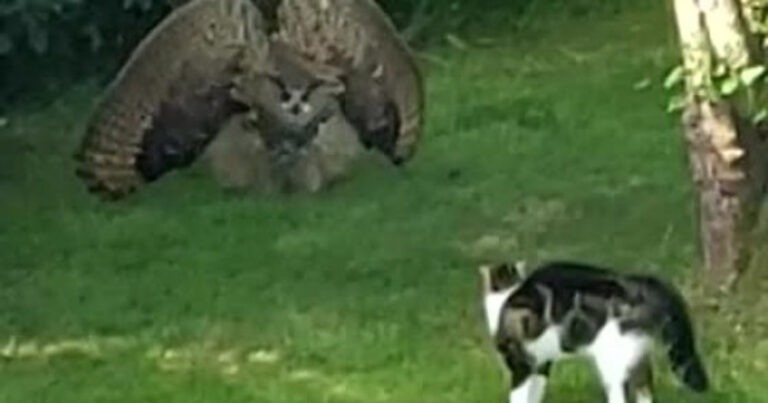 There are quite a few interesting facts about owls. While some of these are well-known, there are a few that aren’t so obvious. Perhaps the most notable of these is how territorial they can be. Related to this is what exactly they’ll do to protect what they see as theirs.

Though the birds have no problem with small animals, such as rodents that it can eat, larger animals present somewhat of a challenge. A lot of this can also be said of cats, although they’re more than happy to use their claws and teeth to defend their territory.

Naturally, when the two animals meet, things are bound to get relatively interesting. At least, that was the case when a Belgian family’s cat came into close contact with an owl. While the exact species of the owl is unclear, it behaved similarly to how the majority of the birds would react when up close to a strange feline.

Cats are known to puff themselves up somewhat when they feel threatened or scared. There has been quite a significant number of videos and images shared online highlighting this. However, what many people may not have expected is for the owl to do the exact same thing.

The Belgian family that owned the cat managed to film the majority of the animal encounter. While the two animals’ first meeting isn’t in the short clip, it does highlight how they reacted to each other. From the video, it looks as though they were both getting ready to throw down.

As one of the family members noted, the encounter with the owl was so strange that she had to record it. However, she did so from inside the house, leaving the quality somewhat less than optimal. As she notes, when she went outside to get closer, the owl flew away. At least it prevented bird on feline violence.