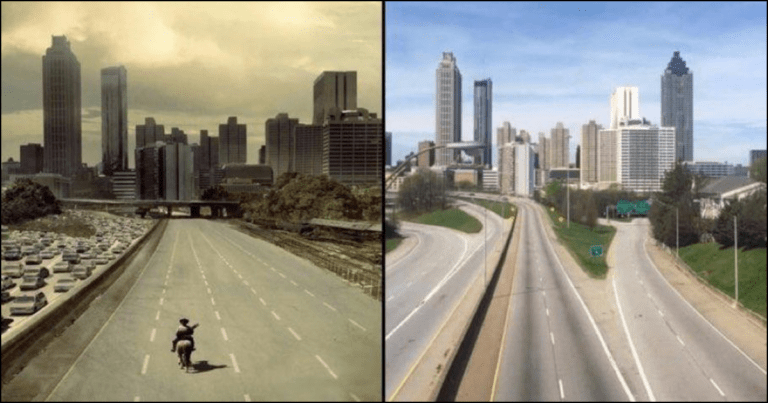 Across the world, major highways are consistently filled with bumper to bumper traffic as people are constantly in a rush throughout their day-to-day lives, but due to the recent outbreak of Coronavirus, the roads are now strangely quiet and peaceful in an incredibly creepy way.

Movies dedicated to the end of humanity and zombie apocalypses are usually home to these eerily silent highways, and one that remains most notable is the season 1 poster for The Walking Dead.

We see Rick Grimes on horseback traveling along the empty Atlanta highway after recently waking up from his years-long coma. In search of answers to the many questions he has, Rick can be seen strolling along the road which serves as a sort of ‘calm before the storm’ type image.

The similarities are so terrifyingly accurate that it’s hard to take your eyes off the picture without imagining Rick Grimes, played by British actor Andrew Lincoln, strolling down the deserted highway.

The Walking Dead debuted in 2010 on AMC for just six-episodes. As it is still going strong until this day, the post-apocalyptic horror has almost been running spectacularly for a whole decade.

The show has been atop the most popular series since its time on the small screen, and that doesn’t seem to be slowing down anytime soon as fans are still head over heels for the thriller.

Regardless of your taste in television, it’s hard not to feel uneasy when you compare the two pictures side by side.