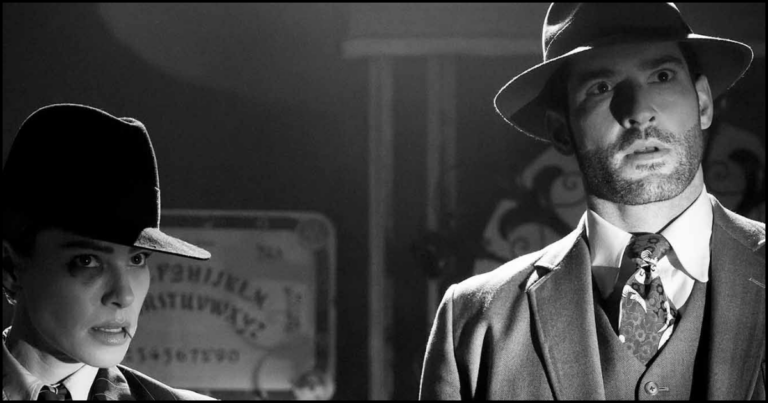 After season 5 of Netflix’s Lucifer officially got its release date – which you can find HERE – followers of the show have been counting down the days as they eagerly anticipate the return of their favorite fantasy-drama.

To keep people interested in the upcoming season of Lucifer, the show has released new images giving fans a look into what’s to come.

Interestingly enough, the photos reveal a noir-style episode that delves into Lucifer and Maze’s past. The black-and-white episode will be titled “It Never Ends Well for the Chicken”.

Although this episode looks incredibly unique and completely different from what we’re used to with Lucifer, it was never originally planned to be in the show’s fifth season.

Writers of the hit-series were preparing to work on their 10-episode season until Netflix increased the episode count by a further 6 – thus giving the team a lot more room to experiment and expand the story with.

Producers are undoubtedly excited for fans to see “heart-breaker” Lesley-Ann Brandt’s performance, which can be expected to include multiple musical numbers.

Despite the news confirming season 6 of Lucifer to be official, later reports suggest that the sixth installment will in fact be the shows final – and you can read about it HERE.

Ever since it was released back in 2015, Lucifer has been one of Netflix’s most popular television shows, though it has never received an award despite being nominated ten-times.

While there were contract problems involving frontrunner Tom Ellis (the man behind Lucifer) – which you can find HERE – the main man rejoined the cast and is set for furthering his role until the shows eventual end.

Enjoy the pictures so far? Check out the rest below.

Are you looking forward to the fifth season of Lucifer? Do you think you’ll enjoy the upcoming noir-type episode? Make sure you share your thoughts and opinions in the comments.