Freaked DISCOVER THE ART OF PUBLISHING
Home Horror News Watch Stephen King Read From His New Book, ‘If It Bleeds’. 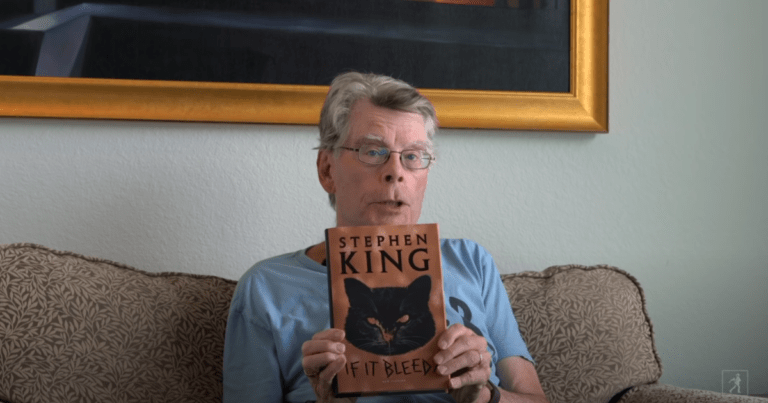 Just this past Friday, Stephen King took to a live stream to share the first chapter from his new book, If It Bleeds, in anticipation of its release.

Donning a Lover/Loser shirt from 2017s returning horror movie, IT, the horror icon reads a section of the first of four novels that make up the book, titled Mr. Harrigans Phone.

The story is intended to give us a completely different outlook on our current technology, which the author himself famously mistrusts.

Stephen King is known for making us doubt the very world we live in, and it is highly expected that his upcoming book, which drops on April 21, will possibly change our view on technology forever.

Sit back, get comfy, and watch as Stephen King invites us into the world of his new book ‘If It Bleeds’.

Alongside Mr. Harrigans Phone, two of the other stories in the novellas collection are The Life of Chuck, a story of a global tragedy told backwards and Rat, a story that follows the deadly fate of an author whose stories are not as straight forward as they seem.

Stephen King is one of horrors most legendary writers, and during his illustrious career, the American-born author has managed to earn a handful of awards, including two Primetime Emmy nominations.

The Shining, The Shawshank Redemption, IT, Pet Sematary, Carrie, Stand By Me, Misery, and The Dead Zone are just some of the vast amount of movies Stephen King has helped create and it’s hard not to understand why this man is one of the best there ever was.

Interested in buying one for yourself when the book hits shelves on April 21? You can do so by visiting HERE!

Are you a fan of Stephen King and his work? Why not try out the virtual tour of the Stanley Hotel from the safety of your own home HERE!