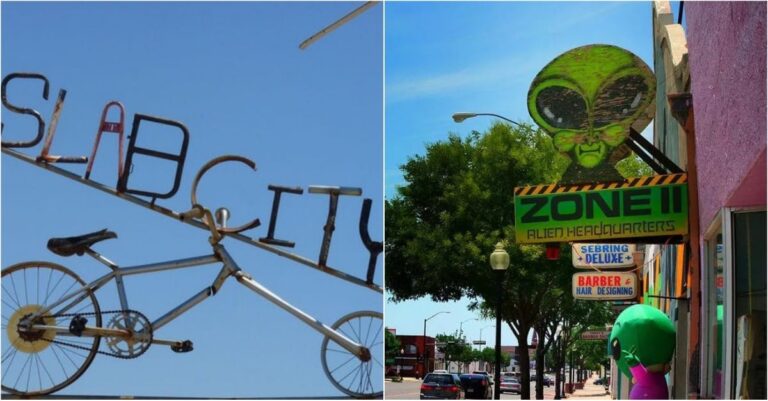 In May 2016, a post that appeared on Medium sparked major interest in regards to the weirdest town in the Unites States. In order to figure this one out, Lyman Stone made use of twenty differing variables such as what percentage of each town’s population was married, foreign-born, working, in the armed forces and so on. This data was then compared with national averages. According to him, San Jose, CA, is the most bizarre town in the US. However, San Jose is nothing more than demographically weird.

On the other hand, the 16 towns mentioned on this list are some of the weirdest, creepiest, saddest and most psychopathic of town.

Centralia, PA – Blazing Since the ’60s

Centralia, PA had 1,000 citizens in 1981. By 2010, only 10 people remained. The reason everyone left was because of a coal mine fire which was burning since 1962 underneath the town. Gas, toxic smoke and sinkholes are common to the town. Despite being ablaze for more than half a century, experts believe it will burn another 250 years. It is impermissible by law to live there and in 1992, the state of Pennsylvania seized and condemned all property in the town. The current residents were allowed to live, but once they die Centralia will be devoid of human life.

Whittier, AK – All Residents Of One Building

58-miles Southeast of Anchorage, there exists a small town where everyone lives in one building, together. All 214 residents of Whittier, AK live in the 14-story Begich Towers. Originally, the tower was an army barracks, but it later grew to include a post office, video rental store, church, police station, health center and playground.

Elsie Eiler is the singular resident of Monowi, NE. She used to live with Rudy, her husband, until he passed away in 2004. Elsie is the sole bartender, mayor, and librarian. She pays taxes to herself. Once she passes away, the town will be empty.

Locate in the Chesapeake Bay on Tangier Island, Tangier, VA, is one of the oldest cities in America. In addition to that, residents of Tangier have an accent so unique that linguists say is unlike any other place in the US. The dialect of Tangier’s locals is a long-forgotten mix of old British twang and an “American” accent. Some people share the belief that the Founding Fathers and early settlers spoke similarly to how the residents of Tangier speak now.

Hell, MI – A Town That Fits The Name

Hell, MI, is located to Ann Arbor in the southeastern part of the state. The name of the town comes from when one of the city founders was asked what he wanted to name it back in the 1840s. His response was, “You can name it Hell for all I care,” and then it just stuck.

The town really embraced its name and is full of Hellish and Satanic emblems, references and symbols. You can “buy a piece of Hell” (purchase a plot of land in Hell), enjoy a burger at the Hell Hole Diner, get married in a devil church and even consume a Gravedigger Sundae at The Creamatory at Screams. It even had its own university called Damnation University – or Dam U for short.

Slab City, CA – Off the Grid

Vice is a place renowned for its stoners and eccentrics. It is a peaceful town that everyone can live in peacefully and off the grid – the perfect place for hippies. Currently, the town has 150 permanent residents. In Vice’s words: “Slab City is referred to by its residents as ‘the last free place in America.'”

The 14,234 residents of Gibsontown, FL are majorly sideshow freaks and carnival workers who spend the off-season in the welcoming climate. They refer to the town as “Gibtown”. At one point, the tonw had a dwarf of a local police chief and an 8-foot giant for a fire chief.

Don Sammons lived in Buford, WY, with his only son and wife. The three of them made up all the residents of the town. In 1992, he has bought the town but after his wife passed away in 1995 and his son moved out in 2007, he decided he didn’t want to live there anymore either. He put the town up for sale in 2012 and he received the highest bid of $900,000 from Phan Dinh Nguyen, a Vietnamese coffee magnate, and his business partner. They renamed the town to their coffee brand name: PhinDeli.

A Colma, CA – The Resting Place Of Two Million People

17 cemeteries exist in all of Colma’s two square miles. It has been dubbed as the “City of Souls” because it is home to about two million dead people. The alive residents of the town are only 1,200. Interestingly, William Randolph Hearts and Wyatt Earp are actually buried there.

Miracle Village is home to over 100 registered s** offenders and lies outside of Pahokee, FL. Minister Richard Witherow, who worked for 30 years in prisons, founded the town. He created the housing society as a place for recently released s** offenders to rehabilitate and live while reintegrating into society. Witherow alongside Mathew (25), his ministry, oversee and approve the development residents of the place.

Another name for this town is “the world’s most famous, most exhaustively investigated, and most thoroughly debunked UFO claim.” Residents of Roswell, NM, claimed in 1947 to witness what appeared to be a UFO crash. Although the military confirmed that it was just a conventional weather balloon, many still believe in the rumor. Since then the town has been a hub for UFOs and conspiracy theories.

Maharishi Vedic City, IA – Where All The Homes Look Alike

In Maharishi Vedic City, all the houses and buildings look alike. The local government decided all buildings needed to reflect the Maharishi Sthapatya Veda – an ancient architectural system of design from Hindu yogis which is fabled to protect the residents.

The town is 77 square miles and contains 250 people. It boasts fully organic food and all pesticides are banned.

Rumor has it the town stinks of pungent popcorn odor. However, the name actually came from the Creek War of 1813 when the corn fields were burnt. The town currently has no population data due to the fact that the last consensus was carried out in 1880.

Hildale, UT, is known as the polygamist town – abundant with Mormons and Mormonism. Being home to the Fundamentalist Church of Jesus Christ of Latter Day Saints, visitors state that they feel extremely unwelcome when they visit. It is a twin city of Colorado City, AZ, – another polygamist town. Critics claim that the place has an atmosphere of a prison.

Nameless, TX is easily the best name from its peculiar counter parts, Ugly, TX, Peculiar, MO, and Accident, MD. According to legends, when its residents applied for a post office, the name on the application was left blank. The US Post Office Department then issued applications back with “Nameless” stamped on the form. And so it stuck.

The Villages hosts 70,000 residents. It is also known as “Florida’s Friendliest Retirement Hometown” and equally has the highest STD rates. Some senior residents were even seeing going at it on a golf cart. With 34 golf courses in the town, there is evidently heaps of fun thigs to participate in. Resident Roselyn Shelley said, “Whatever you know about 20-year-olds, it’s the same with seniors.”

Although each one of these towns is wholly weird in its own way, there are still many creepier and odd towns of the US that didn’t make it – such as Portland, Hollywood and Providence. The aforementioned town are famed for how oddly they stand out from amongst the rest for a plethora of reasons. It is easily your best travel guide into the weird small town in America.