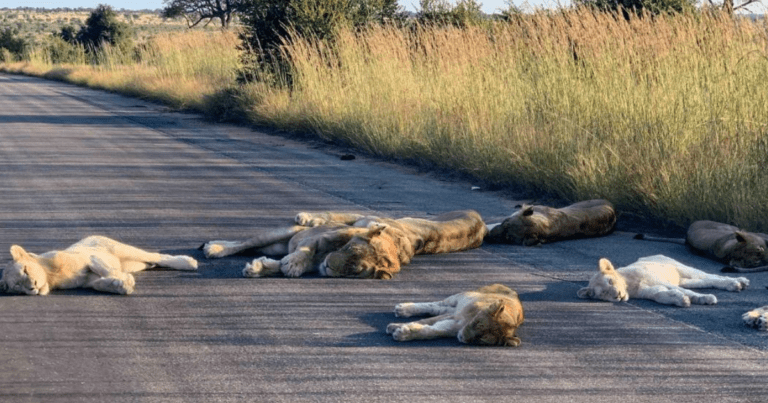 Animals around the world have been spotted treating the outside world with a lot more freedom since lockdown has been in place, and that’s no different for these adorable Lions.

Like most countries, South Africa has implemented a nationwide lockdown in hopes of quickly abolishing the current pandemic affecting the world, and in the absence of human activity, the wildlife can be seen taking it easy.

Below, you can see the images that show a pride-of-lions relaxing while sprawled across the road, completely uninterested in the photographer’s presence.

Usually, the surrounding area would be full of tourists but has been occupied by animals ever since Kruger National Park temporarily shut down on March 25.

As stated by Kruger National Park on their social media, these residents are not normally seen by tourists on their visit to the park.

While visitors are still banned from attending the Kruger National Park, food delivery, security, and emergency services, along with wildlife crime operations are continuing throughout the lockdown. South African lockdown has been further extended from its original 21-day period to the end of April.

Earlier this month, Yosemite National Park shared a video showing groups of animals venturing through their untouched grounds, showing us the beauty of nature without the interuption of human life.

Another reported case of animals resurfacing due to human absence was reported when Sea Turtles nested on Indian Shores without the intervention of humans for the first time in SEVEN years!

How are you feeling about the recent appearance of wild animals who are now roaming areas completely safe from human interruption? Should more be done to give animals greater freedom upon our return to normal society? Let us know your thoughts in the comments.