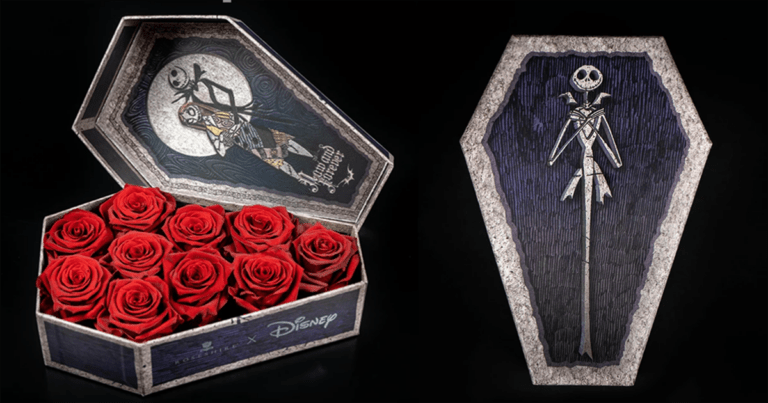 When it comes to romance featuring the undead, it doesn’t get much better than the story of Jack Skellington and Sally from The Nightmare Before Christmas and now you can buy your own bouquet of roses which are based on their relationship from the film.

After it gathered a huge dedicated fanbase, The Nightmare Before Christmas quickly became one of Disney’s most merchandisable features and since its release, there have been untold amounts of clothes, bags, collectibles, and toys based on the leader of Halloween Town and the other characters that we are introduced to throughout the award-winning stop-motion masterpiece.

And now that luxury rose brand Roseshire has teamed up with Disney to produce a huge collection of themed arrangements, The Nightmare Before Christmas has been brought to life once more.

There are two Nightmare Before Christmas themed bouquets to choose from, aptly named Nightmare and Now And Forever.

The Nightmare arrangement is comprised of 20 fresh roses which are paired with exotic thistles which are said to be “inspired by Sally and Jack Skellington from a scene in the movie”. The roses are painstakingly arranged, often taking over an hour to complete. Nightmare is delivered to you in a custom-built coffin-shaped box and you can include a handwritten message. Also included with the package though is a hefty price tag, as Nightmare will set you back $205.

The currently sold out Now And Forever package is equally as charming and it hold 10 preserved roses which the company say will last for up to 2 years without water!

Roseshire is also offering bouquets based on many other Disney Franchises, including Beauty And The Beast, The Little Mermaid, Alice In Wonderland and Minnie and Mickey themselves.

So if you’re a fan of Tim Burton or anything Disney, check out these outstanding floral displays!