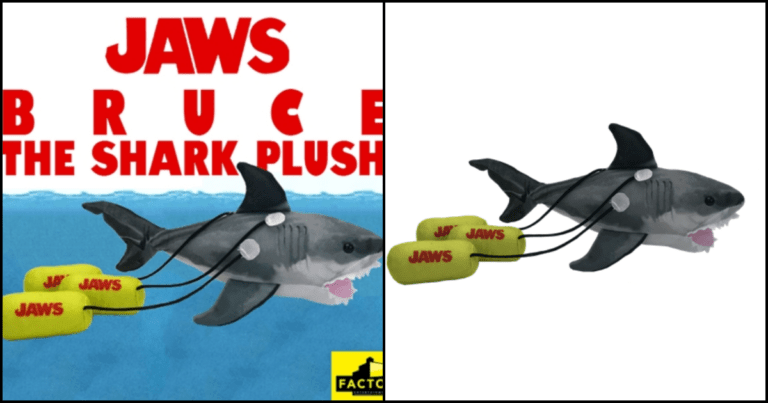 This year celebrated the 45th anniversary of Steven Spielberg’s Jaws, and in honor of the movie, Factory Entertainment has released a toy which was set to debut later this year at San Diego Comic-Con.

San Diego Comic-Con is scheduled for this month, although it now has a ‘not in-person attendance’ status.

Meet the incredible “Bruce the Shark Plush”, the officially licensed, 12-inch long, and extremely lovable toy dedicated to the infamous shark from Jaws.

Alongside Bruce and his terrifyingly cute look comes three yellow barrels that are attachable to his body.

If you want to own one of your own, you’ll need to act fast. The plush toy is limited to just 1,000 pieces and is available to pick up this week through Factory Entertainment’s official website where they’re selling for only $25 each!

Get yours while supplies last and you can expect it to ship during the week of August 24th, HERE!

When an unexpected beach community becomes the target for a killer shark, it’s down to a local sheriff, a marine biologist, and an old seafarer to hunt down the beast and lay end to the terror.

Steven Spielberg’s classic was a huge success in the mid-late 70s and the wonderfully put together thriller saw the movie take home three Oscars from its four nominations.

Aside from the Academy Awards, Jaws collected a Golden Globe, a BAFTA Award, and many others in its long, successful reign almost five decades ago.

The original Jaws starred Roy Scheider as Brody, Robert Shaw as Quint, and Richard Dreyfuss as Hooper, along with many more cast members.

Will you be one of the select few to pre-order the “Bruce the Shark Plush”? What did you think of the toy? Share your thoughts and opinions with us in the comments below.