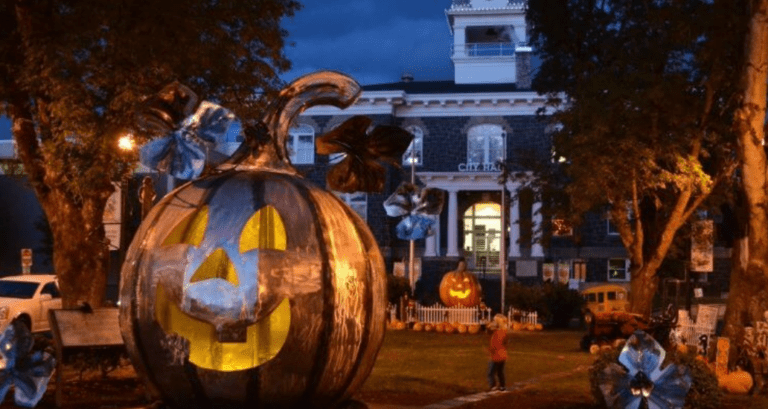 Halloweentown was a Disney Channel original movie that was released back in 1998. It instantly garnered a dedicated following and eventually spawned three feature length sequels.

But fans of the franchise and Halloween enthusiasts were looking for something more, which is why St Helens, Oregon where Halloweentown was originally filmed, holds an annual ‘Spirit Of Halloweentown’ festival that runs through the month of October.

Starting October 1st the entire town is decorated and styled after the original Halloweentown film, including a giant pumpkin which they light up ceremoniously to add to the Halloween spirit.

There are plenty of free attractions going on at the festival, including self-guided walking tours complete with informative tour maps, the Scarecrow Trail experience and The Museum of Peculiarities and Oddities.

According to the events Facebook page this “long celebration of the season [lets you] See the giant scarecrows, fall colors and merchants turned to immortal forms as fairies, witches ghosts and ghouls” They continue to say “We love Halloween and we let it show”.

On October 1st the whole town becomes like a scene out of the iconic Halloweentown including decorating the entire area and people dressing up in their best Halloween outfits.

That’s not all however as there are scheduled events going on throughout the whole month which in the past have included: a masquerade ball, photo ops with Benny the skeleton cab driver, gothic dance parties and meetups which included Buffy The Vampire Slayer stars Emma Caulfield and Nicholas Brendon.

If you’re a true fan of Halloween you simply cannot miss the Halloween parade, the haunted house or any of the multitude of events that are on offer throughout the Spirit Of Halloweentown festival.

It’s not just about the attractions though. There is also delicious Halloween food and drink available throughout the event including nachos, homemade cakes and pies, caramel apples, chili, chowder and of course Halloween candy.

To find out more head over to Columbia County’s Spirit of Halloween page here.