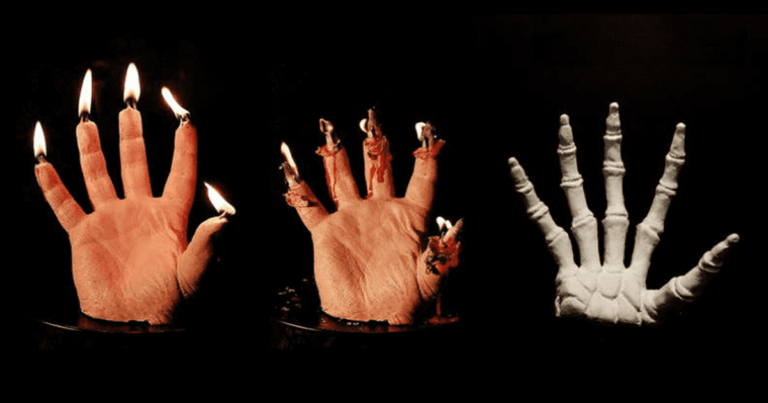 Morbid house accessories are nothing new. However, there are a few that stand out from others, be it for their morbidity or something else. Naturally, these tend to be the ones that many people go for. These bleeding hand candles definitely stick out in that regard, as they’re some of the creepier ones that you can find online.

While they are, thankfully, unscented, the candles look quite life-like, which should help add to their appeal. Alongside that, they’re available in a few different styles. If the ones that are as life-like as possible are too creepy, then you could go with the skeleton hand. Whether or not this is the creepier option remains up for debate.

Adding to the irony of the candles is that they’re all hand-made, although we’re hoping that they’re not modeled after the creator’s own hands. While the bleeding hand candles don’t bleed straight away, they start to once you have them lit, which could make them much more morbid the longer you have them lit for.

This could be one of the more creative, though disturbing, ways that candle wax has been used in products for quite some time. As a result, you’ll be able to set a nice scene anytime you have people over. While it’s more similar to a horror scene, it still counts as a scene nonetheless.

With Halloween being a few months away, you’ll have plenty of time to stock up on a few of them for your decorations. If you’re someone who wants to scare visitors as much as possible when they come looking for candy, then these could be some perfect accessories. With a convenient placement, you’ll have people terrified pretty quickly.

Developed by Creepy Candles, the bleeding hand candles are available from $48.99 on both Etsy and Amazon, plus any related shipping costs.