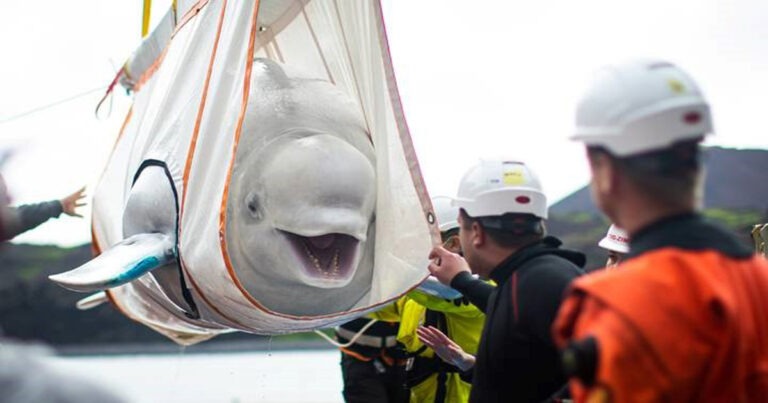 When you think about things that are hard to transport internationally, two beluga whales is probably pretty high up on that list. But UK based organization Sea Life Trust who operate a Beluga whale sanctuary in Iceland has done just that. The whales who are aptly named Little Grey and Little White successfully completed their trip from Shanghai Sea World to Klettsvik Bay in Iceland and will be allowed to roam in open waters for the first time since 2011 when they were part of a Russian whale research center.

In an announcement made last Sunday, the head of Sea Life Trust Andy Bool said that everyone involved was “absolutely delighted to be able to share the news that Little Grey and Little White are safely in their sea sanctuary care pools” and that the two were “one step away from being released into their wider open water home.”.

Bool goes on to say that every part of the first phase for getting the pair located in their new open water habitat had gone smoothly.

Little Grey and Little White will be the first residents at the newly finished sanctuary which measures in at a whopping 32,000m². Here they will have access to round the clock care and attention whilst also being able to roam relatively freely.

Usually found in Arctic and Sub-Arctic waters, Beluga whales are also often referred to as ‘sea canaries’ due to the way in which that they are the most vocal of all whale species. Even though they are currently listed as ‘Least Concern’ on the endangerment index they do face threats from climate change, hunting, pollution, and oil and gas developments made on their territories.

If you would like to read more about the Sea Life Trust or donate to the cause, you can visit their website here.