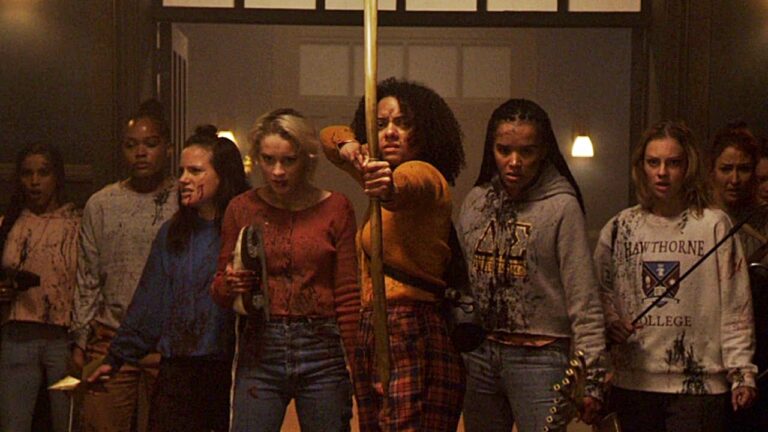 It is almost as much a Christmas tradition as putting up the tree that somewhere along the line you’ll receive a gift that goes into the category of “Well intentioned and well meaning, but crap”.

Whether it’s the aunt who, hearing of your interest in the genre bought you a second hand copy of Eddie Murphy’s ‘Haunted Mansion’ genuinely thinking it was a horror film, or the friend who gave you a ‘Have a creepy Christmas’ badge, because, well, “You’re into that sort of thing aren’t you?” It happens every year.

Which is fine. In the case of presents it doesn’t matter. You remain grateful because they bothered to get you anything at all, these are your friends and family and in the end, ‘It’s the thought that counts’.

The same does not apply to movies.

With movies good intentions do not always equal good films and sometimes it is the lack of thought, particularly for the audience, that counts.

Black Christmas sets out to be a banner film for women in horror movies, unfortunately, it’s not. And the reason it’s not,  is because just like those presents, it’s well intentioned and well meaning, but crap.

The original Black Christmas had the distinction of pre-dating many slasher films, now considered seminal, by a number of years and is often cited by horror buffs as one of the earliest examples of tropes that would eventually come to define the sub-genre.

That this newest remake (the film was remade before, as recently as 2006) is well intentioned is beyond doubt.

It’s attempts to knowingly and overtly redress some of the misogynistic cliches perpetuated by the slasher flick sub-genre its original helped create, is commendable. Problem is, the film is not. At all.

The most awful thing is that the film’s insistence upon pointing out its good intentions and foregrounding them with all the subtlety of an air raid siren is a massive part of the problem.

What should be a timely feminist battlecry against toxic masculinity and the blind eye often turned to sexual harassment and assault on campus, is instead a self aware melange of uberwoke soundbites sandwiched awkwardly into a flimsy horror plot.

Ostensibly the story of a group of female students terrorized by a killer they later discover to be part of a creepy campus conspiracy, the film actually feels like a loosely strung together mess of politically correct buzzwords that, without a meaningful context, seem disjointed and hollow, undermining their inclusion in the first place. Particularly as they come at the expense of believable scripting, plot development and anything resembling suspense, tension or a genuine scare.

By the time the film gets to its hoaky supernatural twist you’ll have lost all interest and have your own desire to kill, brought on by the feeling that you’ve been lectured to for over an hour when what you wanted was a horror flick.

Black Christmas’ attempt to further female agency in horror is to be applauded, unfortunately that is the only applause it will receive, meaning that the movie’s stated aims are diminished by its own brattish self satisfaction and, more importantly, by the fact that it just isn’t a very good film.

To get a message across to an audience and more importantly to get them on board, time and effort needs to be invested in the vehicle carrying that message. The vehicle could be shocking, terrifying or unusual, but what it cant afford to be is lacklustre, mediocre and boring.

To those of you thinking I shouldn’t be this negative at Christmas time I say “Bah humbug”. With an idea this important, well intentioned but crap just doesn’t cut it.

In keeping with my tradition of offering five word rather than five star reviews I say  “Mediocre gender studies, poor horror” and since it’s Christmas, I’ll give you an extra one for free “Go watch the original instead”. More than anything though, the two words that stuck with me after this film were “Missed opportunity”. Merry Christmas indeed.