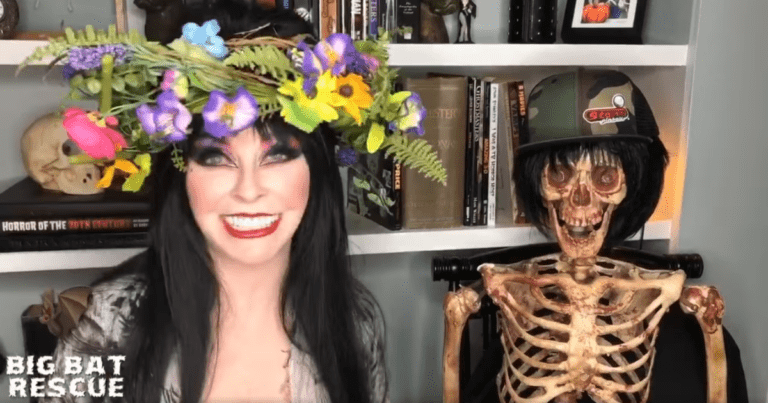 Elvira is back with another hilarious video and it couldn’t have come at a better time for all of us stuck in our homes.

While she continues to brighten everybody’s day with her short clips, Elvira is not just entertaining us but potentially saving lives as people in lockdown are beginning to crave watching material.

Elvira, now showing off an over-the-top flowery crown, sits down to let us know that her husband Don is just fine regardless of what rumors you may have heard.

The video of Elvira mocking Carole Baskin is just over 1-minute long so get yourself comfy and enjoy another small piece of brilliance brought to us by The Mistress of the Dark herself.

Carole Baskin rose to fame in Netflix’s docu-series, Tiger King. The biggest controversy that surrounds since her appearance on the show is that she could have played a part in the disappearance of her husband, Don Lewis, back in the 90s.

While we don’t have the answers thus far, we do have Elvira to enlighten us in a humorous way.

Tiger King follows Joe Exotic, an animal park boss whose life takes a dark turn when he is caught up in a murder-for-hire plot.

The show has been a hit since its official release onto Netflix and fans have loved speculating on whether Carole Baskin isn’t as innocent as she’s making out to be.

If, like hundreds of thousands of people you’re a fan of Elvira, why not go and check out her recent video where she explains how she stays safe during this recent pandemic, of course, she makes a fantastic joke out of the situation.

Did you know that a Tiger King series sequel has been announced? You can read the details here.

We hoped you enjoy Elvira’s parody of Carole Baskin? Make sure to share your thoughts in the comments.