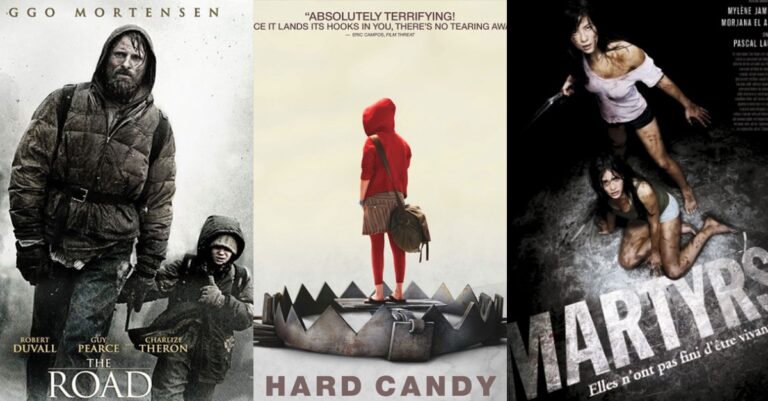 Some people deliberately seek movies that creep them out or terrify them. After all, the horror film franchise is booming all over the world. However, some movies do not fall under the category of horror but still retain the uncanny ability to terrify you in disturbing ways. We took to Reddit to find out from movie buffs which movies they would never want to watch again for how deeply unsettling they were. The following is a list of the best 25 picks.

“My brother told me not to watch this so of course I did. Never again. No redeeming value and a complete descent into madness.” — ShagCarpetBomb

The ABCs Of Death

“It’s a compilation of short films where the cause of death is related to a letter in the alphabet. Example A would be Abortion, B would be Bludgeoning and so on. I stopped watching after a short which had a scenario where two men are trapped in chairs and have to jack off to whatever was happening in front of them. Whoever finished last/didn’t was killed and it follows the winner round after round. Then they bring out a small child and an old man in a Bed in front of them. Had to turn it off after that.” — Cynical_Jingle

The Act Of Killing

“There’s nothing more surreal than watching mass murderers and rapists walk around freely, laugh about their crimes, be interviewed on television and then act out their crimes. It’s honestly the most disturbing and affecting thing I’ve ever seen.” — khytre

“There was this movie that used to be on Netflix. It was called Megan is Missing. The acting was abysmal, but the plot was fucked up. Basically, two preteens, who are complete opposites (one goes out to party and the other is somewhat shy) start talking to this guy online and eventually meet. The party girl goes missing and authorities ended up finding pictures of her in some crappy s** dungeon being tortured. This guy ended up getting the shy one and just violates her and buries her alive.” — FuckSpidies

“Nothing is scarier than real life, so my list of movies I’d never watch again is filled with documentaries. One of the movies at the top of the list is Jesus Camp.” — EdwardJames11

“Jack, the 1996 Robin Williams film in which he has Werner Syndrome and so ages four times faster than normal and as a result has the body of an old man but the brain of a child. He gives an emotional speech at the end to tell his friends to live their lives (because he’s about to die) and it destroyed everyone in the cinema.

The Boy In The Striped Pyjamas

“I’m pretty hard to shock when it comes to disturbing movies and can generally watch most things and feel very little afterward, but that movie had me in bits. I saw it as part of the Holocaust memorial week when I was in primary school (aged about 11) and it seriously screwed me up. I think it was knowing that it essentially really happened. I remember feeling sick to the stomach and crying. They showed it to us again a few years later and I was the only kid in class who had to leave before the end because it basically gave me an awful anxiety attack.” — jonifroyo

“I’m generally not a fan of movies about r***, child molestation and such – I simply don’t get any entertainment or educational value out of it; to the contrary they make me very uneasy – but that one took the cake.” — godless-life

“I can’t get the ending out of my head. I get nauseas even thinking about it.” — BCNman

“It’s a documentary on HBO that initially sought out to ask some questions about a “sport” called “competitive endurance tickling” that the documentary creator found videos of online. He thought it was such a weird concept that he sent an email to one of the companies behind it to request an interview and the documentary just goes haywire from there. He starts to receive threats and hundreds of twisted, insulting, and accusatory emails as he uncovers a multi-million dollar, international, nefarious organization behind “competitive endurance tickling.”

It’s a great documentary, but extremely uncomfortable to watch. Every time that you think “Okay, this is fucking weird, but it can’t get worse than this,” something new happens that is 10x worse than the rest. I’d highly recommend it, but I have no interest in seeing it again.” — BoboIsDead

“It could so easily happen to anyone, even now, but so much more so in the 80s/90s. Think it should be mandatory viewing in s** ED class to emphasize the importance of suiting up.” — louannabanana

“Currently reading the book. This makes The Walking Dead look like a vacation.” — nomoretears31

“An eerie coincidence occurred for one of the crews when filming Wolf Creek. One night, they were sleeping in their cars because they were far away from civilization and a stranger showed up who looked like John Jarratt (the actor in the film), right down to the rustic truck. The stranger left but the crew were so spooked that they drove for approximately an hour to camp at a new site to catch sleep and resume filming the next day.” — equtopia

“Out of the entire thing, which is basically just a series of fucked up things happening, the most wrenching bit (for me) is the part where the President shits on the floor and screams at that sobbing girl until she eats it.

That is probably the most emotionally draining scene, watching her break down at that part.” — _This_Is_Stupid

“I watched this movie once (12+ years ago). History classes were a joke at my school. They totally just glossed over the holocaust and that was that ‘Jewish people were put in camps and gassed, the end.’ My mom had the movie (still does) and being a curious teen unsatisfied with the school’s idea of important relevant information, I watched it. It was disgusting. I was horrified by what I saw.

However, the film is wonderfully done. I learned a lot more from that movie than they even bothered teaching in class, instead of the whole event being taught in a rug-swept manner like it didn’t matter.

When my little one is old enough, if she wants to watch it I’d watch it again with her.” — crashandburnxoxo

“The most unsettling part is the subtlest really. About half way through the r*** scene a guy walks into the tunnel, sees what’s happening, then just walks away.” — yourdadsotherkid

“As a male viewer of the film, I will say the film made me much more empathetic about how women must feel when viewing acts of sexual violence towards women seeing the shoe worn on the other foot for once.” — SalemMO65560

Requiem For A Dream

“I ‘popped’ into a theater to see this after work, after which I planned to buy groceries and then get dressed up and go out. Instead, I went home and drank alone. Classic day-ruiner. A movie can only do that when it’s great.” — davmpls

“Great flick but… the greatness left one with a very… I can’t describe it… existentially horrific aftertaste?” — where_is_my_lunch

“The most heart-wrenching documentary I’ve ever seen.

If you want to be taken for an emotional ride, don’t look up anything about the film, and just watch it.” — AhmadA96

Grave Of The Fireflies

“That film was so depressing… made me lose faith in the human race.” — astarisaslave

“This movie left me in stunned silence for the entire day after I watched it.” — PapaAmIRightus

“I was so saddened, depressed, and just generally pissed off after watching it. I will never watch again.” — bumble_dork

“Nanking, a 2006 movie documentary about the Japanese tape of Nanking.

Can’t shake the memory of old Chinese people recounting the horrors they experienced. Especially not the old lady who retold how her grandfather cried as he held her, after she had sacrificed herself as an 8-year-old girl, to be raped by a Japanese soldier so that her family wouldn’t be harmed.” — Master_McKnowledge

How many of these have you watched or can relate to? Or are you secretly lining them up on your watch-list? The horrors recounted in these films sap the life out of those who watch, rendering them into flaccid lifeless purposeless beings. Truly deeply unsettling, it takes more than just guts to watch these films.