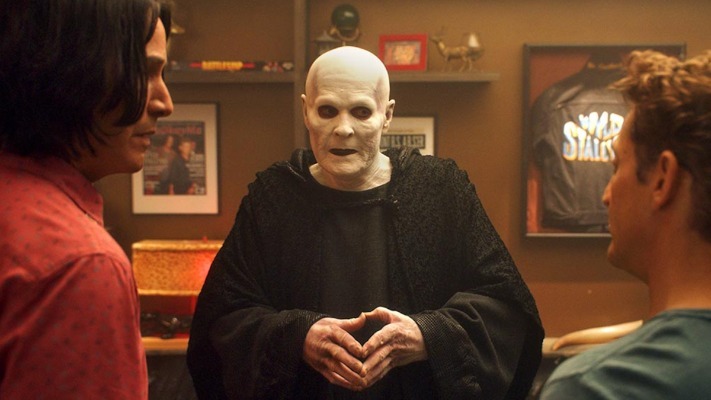 Death is back! EW has just released the first photos from “Bill And Ted Face The Music,” and William Sadler is back to portray Death once again.

Sadler’s Death first appeared in “Bogus Journey,” where Bill and Ted challenged Death to several games in order to escape hell. After beating Death, thus making him their servant, The King Of The Underworld helped them win the Battle of the Bands and save the world. In the third installment of “Bill And Ted,” the duo are attempting to create more music for their band, Wyld Stallyns, which they know will eventually inspire a future utopian society.

Co-writer Chris Matheson commented on the project, having this to say:

“They were told when they were teenagers that they were going to save reality, and they’ve been working on it the whole time,” Matheson said. “Now an emissary from the future comes and says, ‘You’ve got to do it right now. We’ve got literally 80 minutes or all of reality will come to an end.’”

Matheson then divulged that Bill and Ted’s daughters will be helping their fathers on their quest throughout the film, which hits theaters on August 21, 2020.

The daughters really love their dads’ music and want to help them,” Matheson said.

Check out the first released photos from “Bill And Ted Face The Music” here: