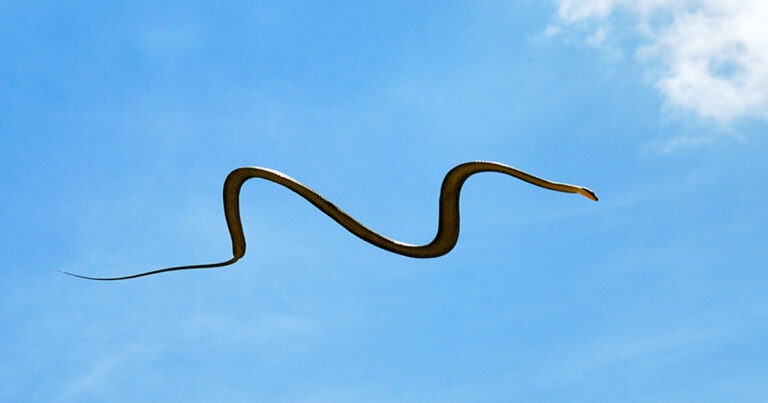 When it comes to snakes, a lot of people are thankful for the fact that they are mostly only a danger on the ground, but all of that may change as new studies are being conducted into the way in which this specific breed is able to take flight between canopies.

The paradise tree snake or paradise flying snake (Chrysopelea paradisi) has baffled researchers for years when it came to the reptile’s strange ability to glide through the air.

According to studies by Virginia Tech which were published last Monday the snake’s gliding motion is thanks to the way in which it undulates in the air just as it would on solid ground. You can check out some of the amazing footage for yourself below thanks to Discovery UK

The lead author of the study Isaac Yeaton said that their focus was to concentrate their studies on this undulation, where he aptly claims “You don’t strictly need to undulate to fall, so that leads to the question ‘well then why are they undulating'”.

After consulting with snake expert Jake Socha who has over 20 years of experience inspecting the creatures the team realized that the specific way in which the paradise snakes moved in the air heavily contributed to stabilizing the glide and stopping any tumbling. They think that the origin of the snake’s behavior in the air ultimately boils down to the “base motor pattern for snakes” which was “built-in over millions of years”, but how or why the first snake took this leap of faith remains a mystery.

The paradise flying snake can be found across southern Asia including hotspots in places like Thailand, Cambodia, Indonesia, and India so if you’re off backpacking soon or are going to see the sights, don’t forget to keep an eye on the treeline.