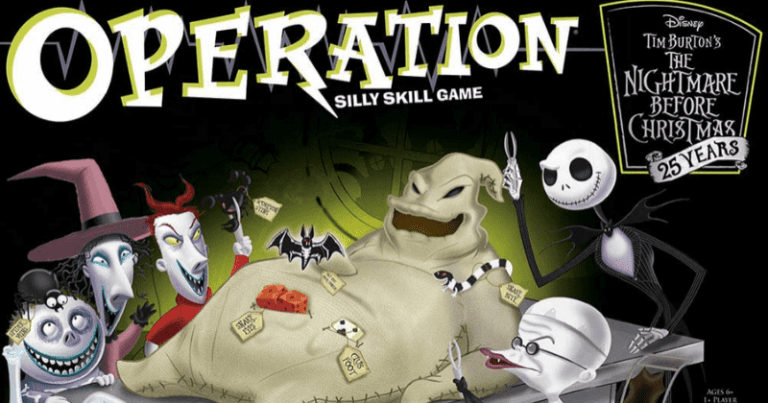 The Nightmare Before Christmas is a seminal movie whose impact transcended across generations. Since its release in 1993, it continued to become one of those rare movies which can be doubly acted as a regular for both Christmas and Halloween movie marathons.

And now, you will have the chance to include it in your board game nights. To celebrate its 25th anniversary, Operation Silly Skill Game has released a special edition game dedicated to the movie.

The packaging alone is already a must-have for dedicated fans wanting to add another piece to their The Nightmare Before Christmas collection. A picture shows your favorite characters performing what could be an operation to Oogie Boogie.

As the description reads, Operation: Tim Burton’s The Nightmare Before Christmas 25 Years allows its players to “become the surgeon, removing the custom Funatomy parts from the game’s patient Oogie Boogie.”

The Funatomy parts comprised of a snake, spider, worms, dice, needle and thread, card deck, keys, bones, bat, scorpion, bug, and a roulette wheel. The players will have to determine how they can remove the two spine-tingling Funatomy parts that are infesting Oogie Boogie.

The Operation game can be played by 2 to 4 people ages six and above, making it a perfect alternative to the family’s usual board games. It is available for purchase from Entertainment Earth.

Aside from OPERATION, USAopoly has also released a Nightmare Before Christmas monopoly board game which allows you to play with fan-favorite Jack Skellington and his love interest Sally.

MONOPOLY: The Nightmare Before Christmas 25 Years will transport its players to familiar locations such as Sally’s Alley, Dr. Finkelstein’s Laboratory, Jack’s Tower, and Oogie Boogie’s Casino. Each location will have a custom Title Deed card and in classic Monopoly fashion, a well-formed strategy is important.

2 to 6 people can play the game at once and will compete for the Pumpkin King title. The game is now available at Entertainment Earth for $35.99.

Will you be getting your own OPERATION and Monopoly versions of The Nightmare Before Christmas? Share your reactions in the comments section below.