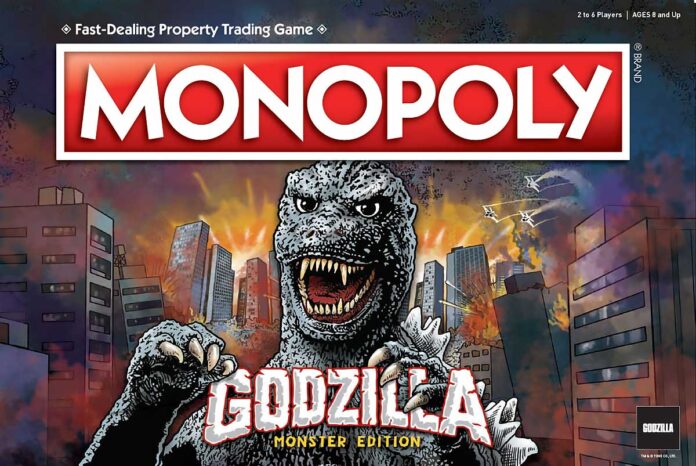 With previous successes with themed sets focusing around franchises such as Pokemon, Garbage Pail Kids, Star Wars, The Simpsons and Zelda, boardgame behemoths The OP Games and Toho Ltd, Godzilla rights holders are teaming up to bring out two new games that Godzilla fans should look forward to.

Godzilla Monopoly is set for an upcoming North America release and has a very inticing product description “Demolish the competition in a city-terrorizing twist on the classic board game with MONOPOLY®: Godzilla. Begin the invasion by buying, selling and trading locations like Monster Island, Goro’s Workshop, and Kitakami Lake and take over the board with Facilities and Bases. Custom sculpted tokens of giants such as Mothra, Godzilla, King Ghidorah, and Mechagodzilla easily impose on anything in their path!”.

Alongside its Monopoly release The Op Games are also debuting Godzilla Jenga, which is a fresh and fun take which combines Godzilla’s destructive powers and a timeless classic of a game.

Both Godzilla Monopoly and Godzilla Jenga are set to be released in Spring 2020.

Mark Hamill’s Skeletor Headlines The Cast In Netflix’s Masters of the Universe: Revelation

50+ Creative Halloween Costumes For Couples That You Can Try