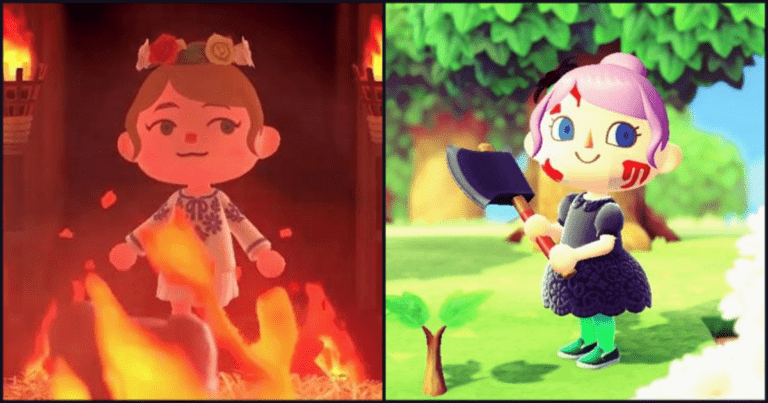 Animal Crossing: New Horizons has taken the world by storm and ever since its March 20 release date, it has received nothing but positive feedback from Nintendo Switch owners.

While Animal Crossing is a family-friendly game suitable for men and women of any age. It is most commonly known for its harmless, relaxing nature, and it’s cute character design, until now.

Some gamers have taken the huge amount of customization options to create incredibly creepy and iconic moments from some of horror’s most memorable movies.

The above image quite clearly shows one player’s representation of 2019s Midsommar, as his character is dressed as one of the infamous members of the Harga cult.

Some players have recreated the famous carpet from The Shining to use to decorate their basement, while others have designed the creepy cabin and seabird scene from The Lighthouse.

Alongside the horror movies, popular scenes from Silent Hill and Castlevania can be found on this not so innocent Nintendo exclusive.

Although there’s not a vast amount of iconic moments from other famous horror movies, TV shows, or games created yet, you can let your imagination run wild and share some of your own ideas.

Blood spatters and handprints are a common custom pattern among the horror-enthusiasts who play Animal Crossing, and when executed correctly, the outcome is brilliant, just like the image above.

If you want to venture into your creative side and build a spooky scene to later share with the world, you can spend time searching through creepy objects and patterns in attempts at creating something like these, below.

Whether you’re interested in creating a dark room filled with skeletons, a crazy-looking woman surrounded by blank-staring dolls, or just want to hang your favorite horror movie posters on the wall, you can when you play Animal Crossing: New Horizons.

Have you managed to design any haunting creations on Animal Crossing: New Horizons? Make sure to share your work with us in the comments.