Freaked DISCOVER THE ART OF PUBLISHING
Home Lifestyle Watch: A Restaurant In The Netherlands Is Using Robot Waiters And It Looks Creepy 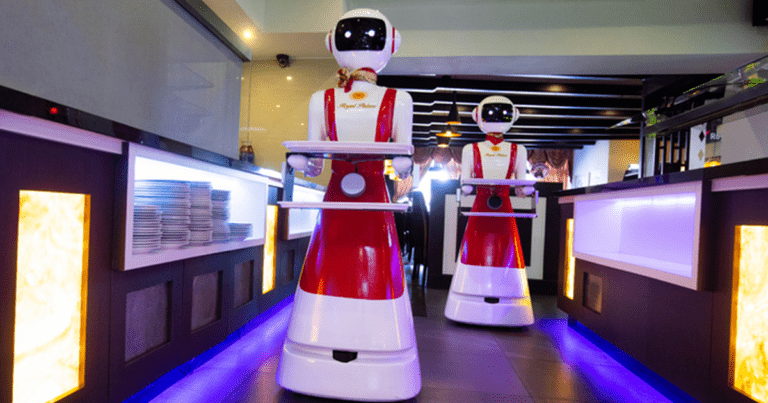 Businesses around the world have been forced to adapt to the ongoing pandemic, with some doing better than others. A lot of this has been focused on person-to-person contact, which has led to many industries facing some difficulties. However, a restaurant in the Netherlands is using robot waiters to get around many health and safety restrictions.

Despite having the best of intentions, it still looks quite creepy. This isn’t helped by the overall design of the robots. Called the Royal Palace, the restaurant is using red-and-white robots for almost every job, aside from cooking, cleaning, and working the cash register. Another aspect that makes the robots a little creepier is that they’re all unnamed.

As a result, diners at The Royal Palace might not be able to establish any kind of connection when they’re being served. Donning a scarf to add to the creepiness, the robot waiters have pre-set sayings, such as ‘hello’ and ‘may I take your order?’ While the creepy factors are all relatively minor, they sure do add up.

However, owner Leah Hu notes that the robots are there purely to lend assistance to the people who are already there. Which was exactly the logic behind Skynet in the Terminator franchise. She goes on to note that the human restaurant workers are not disappearing; they’re just unable to fulfill certain roles for the time being, which is where the robots come in.

It’s currently unclear if the robots will still be around after the lockdown restrictions ease up. The robot waiters have been introduced as the restaurant industry in the Netherlands has suffered some of its worst setbacks in history. Some reports suggest that 5.5 million jobs have been lost in the past few months alone.

At least our robot overlords will be able to bring us food as they overthrow us.