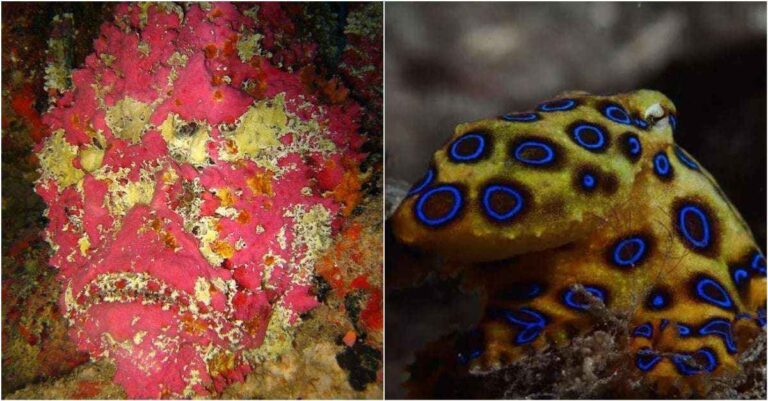 Australia is the home to some of the most lethal animals in the world because of its diverse geographical features. The far-flung areas are the sanctuaries of these animals, and it is less likely that you come across one.  But that does not exclude the rare incidents when these scary animals roam in the vicinity of homes, roads, and parks and bite people.

Not all these deadly fellows of Australia are killers, but they can cause enough damage to let you take your high caution before you go out.

The pretty appearance of blue-ringed octopus can attract anyone, but in reality, it is the most poisonous octopus in the world. It lives all over the coastal area of Australia and even around the Pacific to Japan because these places offer sufficient food to these and security. They store enough poison to kill 26 humans in a few minutes though they are tiny. It does not attack its own, but if disturbed or stepped on, the results are an ultimate death because there is no cure for its poison.

Jellyfish Irukandji with a Fatal Sting

A creature as tiny as one cubic centimeter has the power to be the deadliest animal on the face of the earth. Its home is the Northern Territory of Australia. This, too, like box jellyfish has stingers on her entire body. It can shoot its stingers into the body of her pray and cause severe damage to his brain. Irukandji’s venom is 100 times stronger and faster than the cobra venom. Every year, almost 75 people are admitted to hospital after being its victims.

Australia’s saltwater crocodiles are huge and have extremely strong jaws and sharp teeth.  One of them can weigh more than 2000 pounds.  The males are ferocious and aggressive. They can attack without any provocation. People steer clear of the territories of saltwater crocodiles; hence casualties are not frequent. Normally, one person is attacked in a time span of 2-3 years.

Huge white sharks are not famous for attacking people, but people intruding their territories in the name of water sport or swimming are often bitten by them. These sharks keep roaming the coastline at various places ready to bite any object with their huge set of jaws. Weighing more 5,000 pounds and measuring more than 15 feet, these sharks do not prey on man only but other sea animals, too. In the year of 2016, sharks attacked twenty-three people but fortunately, only 2 of them died.

A great variety of adder snakes are found in Australia. But southern death adder found in Queensland and New South Wales, this snake is the deadliest. Now a cure for its venom is available but before 60 percent of its victims was died.  Sometimes they are also found on central Australia’s sandy coastlines, West coast, and Perth. This snake is not aggressive, but it stays in its place and waits for its prey to step closer and then it bites him.

Bull Sharks can travel to inland rivers and are extremely ferocious. Their preferred places are warm shorelines. They are bold and fierce which makes them the most dangerous marine animals. They attack the humans even if not provoked. Weighing from 200 to 500 pounds and measuring eleven feet long, these sharks can attack anything and eat it.

Though found in Australia, called European honeybee, is one of the deadliest animals. It was brought to Australia from Europe to make honey, but it successfully kills 2 Australians every year. More Australians die because of honey bee venom than shark attacks or spider bites. Its poison causes anaphylactic shock within few minutes after the bite, and if proper medical care is not given to the victim, he dies.

It is colorful but deadly if you step on it. Northern Australia’s tidal pools are its favored habitat. It has spikes all over her back, and each spike is filled with poison. It often lies under the sand and mud. Its brownish green color helps it further to stay camouflaged. If someone accidentally steps on it, the spikes penetrate the skin, and the poison causes swollen feet, shock, paralysis, muscle weakness, and if medical help is not sought immediately, the victim dies.

As clear from its name, this snake is native to the eastern side of the country. It is fast, aggressive, and extremely bold in attacking anyone who comes his way. This species is the most reason for snake-bite deaths in Australia. It enjoys living in heavily populated areas and also farms because of plenty of mice there – the favorite food of snakes. Its venom along with its terrifying behavior makes it doubly dangerous. Once bitten, the victim bleeds to death as the poison averts the blood from clotting at the wound.

The Box Jellyfish of the Northern Territory

It looks delicate, but it is the most poisonous marine creature not only in Australia but the whole planet. This creature shoots poison like darts from the pockets of poison spread all over her body. These pockets are called nematocysts, and the poison that hits an animal or human can cause cardiac arrest, paralysis, and death in some cases. The poison acts fast, and the symptoms appear in a few minutes.

The box jellyfish has a box-shaped body, and it can be one foot in diameter 10 feet in length with its tentacles.  These creatures are found in their most deadly form in the Western Australian coast and Northern Territory of Australia.

Box jellyfish are smarter and faster than other jellies as it can swim up to 4 knots in an hour. Be watchful for its presence around you if you happen to enjoy water sports in its native waters.

Spiders are scary no matter domestic or harmless. But this funnel spider of Australia is far beyond scary because of its lethal feature.  They are found all around Sydney and the coastline of New South Wales. The scientific name of funnel spider is Atrax robustus.  It is tough and sturdy. By building its web in a shape of a funnel, it attracts its prey inside it. The male is smaller in size and lives a shorter life.

The Red Back Spider

This is a very common spider in Australia. It can live everywhere like under the stairs, mailboxes, beneath the seats, trash heap or any hidden dark place but always close to humans. Redback spider bites and it causes extreme pain, and young kids and elderly persons are the most to die from its bite because of a sudden rise in blood pressure, vomiting, nausea, headache, and stomach pain.

The mainland tiger snake holds the record in second place for most bites per year by snakes. It prefers living in populated areas of the country such as the suburbs. They mainly feed on rodents and hence, love living on farms. Due to the proximity they hold with humans, a lot of people get bitten by them. When bitten, the victim’s nervous system is directly attacked, and they soon fall into paralysis.

This snake is found all over Australia and has the heaviest existence among all snakes. It also stores the largest amount of venom – 150 mg in one bite. Its bite is savage, and the victim suffers in its nervous and muscle system.

Australia is truly a place that horrifies those who aren’t native to the land. These are only a few of the terrifying creatures that nature has blessed Australia with. Do you ever wonder what else dwells on those undiscovered lands?