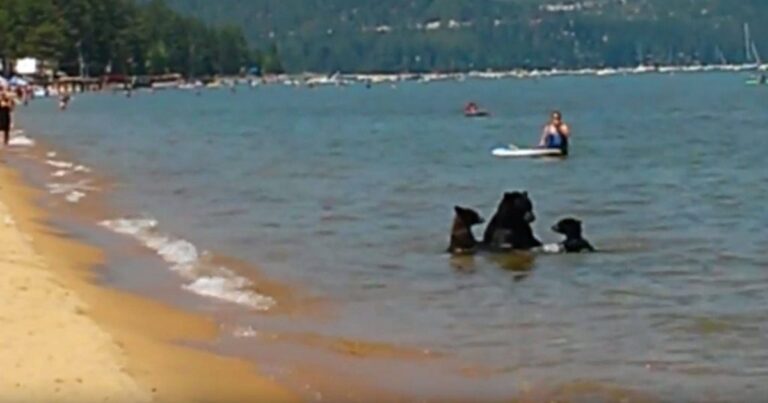 There are a few places that mother bears and their cubs tend to be found in the wild. Mountains and habitats away from human activity tend to be the most popular. However, that doesn’t mean that there are a few odd places that the animals have turned up. A beach in California is perhaps one of the most surprising.

During a hot day recently, beachgoers were shocked to see a wild bear turn up with her cubs to take them for a swim. The Lake Tahoe beachgoers couldn’t believe their eyes with the bears seemingly appeared out of nowhere before taking a dip in the water. Given how hot it reportedly was, it’s assumed that the animals desperately needed to cool down and who can blame them!

That being said, the mother bear and her cubs did spend quite some time in the water. In a video, which can be seen below, the cubs spent time playing in the water and enjoying themselves. Though bears tend to avoid people and vice versa, these particular ones didn’t seem to mind the other beachgoers too much.

In contrast, they didn’t seem to pay them too much notice as more onlookers gathered to watch. However, the fun only seemed to last a few minutes, with the bears departing from Lake Tahoe almost as unexpectedly as they arrived. This still left onlookers with quite a sense of surprise and possibly in shock.

Few people get to get so close to bears and live to tell the tale. The majority of those that do tend to have a range of injuries. However, this is one of the rare instances where people were able to co-exist somewhat with a mother bear and her kids. At least it’s a story that they can entertain their friends and family with and that will leave a lasting impression.

If you missed this article about a woman in Romania trying to get a selfie with a bear, check it out here. Spoiler alert she had more of a shock than a selfie.