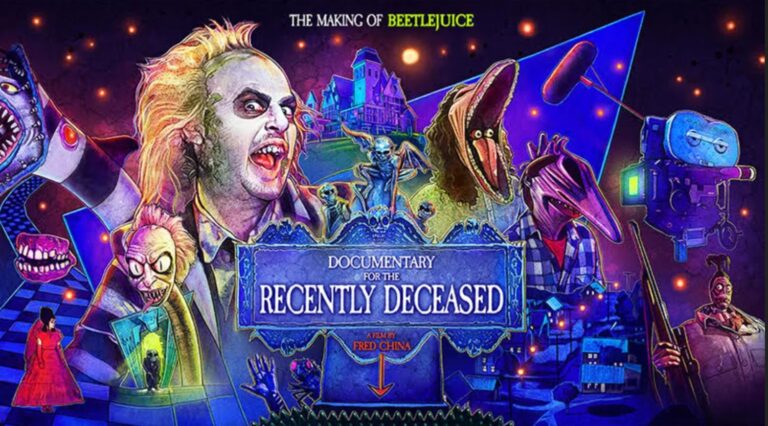 A hopeful Kickstarter began in March 2019 in the hopes of giving horror fans a never before seen insight into the making of the cult classic Beetlejuice. Within a day they had reached half of their total and had soon exceeded their goal of €20,000. When all was said and done the effort had raised over €30,000 and work on the Documentary For The Recently Deceased: The Making Of BEETLEJUICE began.

And now, a piping hot trailer has been released for the documentary which boasts dozens of original interviews with the cast and crew of Beetlejuice which you can see for yourself at the bottom of this article.

The documentary is directed by self-proclaimed Beetlejuice superfan Fred China and produced by The Goldbergs creator Adam Goldberg and Lee Leshen who some of you may know from previous documentaries such as Back In Time.

The Kickstarter says that “The film will cover all the aspects of the Beetlejuice production: from filming in East Corinth, Vermont, to the stop motion and special effects work, as well as a series of exclusive interviews and rare behind the scenes archives acquired by the director Fred China over the years.”.

Not only this but the Documentary For The Recently Deceased: The Making of Beetlejuice promises tours of East Corinth where the film was created, as well as interviews and insights from the people who resided in the small Vermont time whilst the production of Beetlejuice went on around them.

If that isn’t enough, the Kickstarter also promises “never-before-seen archive footage, including stop-motion sequences” which have been remastered and digitized especially for the documentary, as well as an original soundtrack.

So if you are even a small fan of either Beetlejuice or Tim Burton films as a whole, Documentary For The Recently Deceased: The Making of Beetlejuice is one to watch. The film is currently in post-production so it should be available for release shortly. In the meantime have a look at the brand new trailer below.