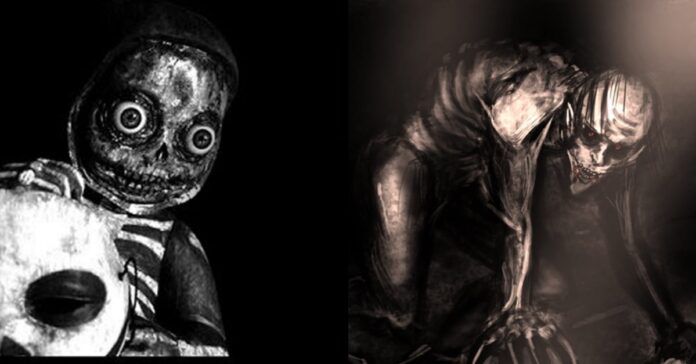 If you thought you had plans for sleeping tonight, think again. The internet may be full of fun videos and nifty hacks but have you ever traversed the deep dark web? The following online urban legends prove that the web is a place far worse than what can cross your imagination. Hide under your bed sheets for this terrifying collection of horrific online urban legends.

Online Urban Legends To Scare The Shit Out of You

A college student was on his usual night time stroll when he encountered a stranger with a maniacal grin. The stranger had a mesmerizing dance and silently followed the student all around the neighborhood. Although the student survived the traumatic experience, it taught him a thing or two about nightly walks – even in his own neighborhood.

In 1972, the tale of a woman who scarily resembled a mannequin arose. She showed up at a hospital one day, dressed up in a blood stained gown. As usual, the doctors took her under their wing, cleaned her up and dressed her wounds. She returned the favor by lashing out and attacking all of them.

Disney’s Mowgli’s Palace in North Carolina was being explored by the narrator of this tale. The abandoned place held nothing of interest other than decaying structures. Or at least at first it didn’t. A short while later a creature dressed up in a Mickey costume approached the visitors and asked, “Hey, want to see my head come off?”

A group of people were gathered in what appeared to be normal conversation. One of their topics of discussion was reminiscing over a show from the 1970s called Candle Cove. Around the end of the get together they learn something haunting: the show never existed.

The reason behind multiple child suicides in Japan was attributed to what is called the “Lavender Town Syndrome.” Children who enjoyed playing Pokèmon Red and Green were affected by the high-frequency music played in the Lavender Town Level of the game. The spike in suicides occurred in February 1996.

Alex went to the store to buy a copy of Legend of Zelda: Majora’s Mask. A strange, old man sells him the DVD. Upon loading the game, Alex discovered that it only has one file on it, titled “BEN.” Alex then found out that the game wouldn’t allow him to create his own story. Instead, he had to relive BEN’s. full of bizarre dialogues and glitches, Alex is haunted by the terrifying BEN. First it was just a game… and then, it transcended into real life.

Presented as an instant message conversation, the tale of Annie and David is scary. One of the creepier online urban legends, Annie is chatting to David on the internet. Suddenly a figure resembling David appears at her window and breaks in upon seeing her.

Presented via forum messages, this tale is one of a girl named Hasumi. She boards the regular train back home but this time it takes on a different route and drops her somewhere unfamiliar. What follows is horrifying enough to earn this tale a spot on terrifying online urban legends.

The local TV shows were being reminisced over by a grown man inclusive of one titled “Mr. Bear’s Cellar”. Eventually he learns that the show was actually a real life story of a man who lured children into his house. From there he followed up by exercising cruel and painful things on the children who showed up.

The infamous online urban legends of a man who is obsessed with horrific and apparently unconnected occurrences gripped the attention of many. Upon discovering more incidents, he finally understands that they are all related. What’s worse, they are the events that shaped his whole life. This tale has been adapted into a book.

The Song and Dance Man

A crowd of people are invited by an old, gangly man at the carnival to dance and enjoy themselves to a free evening of fiddle music. However, the surprise turns out to be a horrible one when everyone discovers that they are physically incapable of stopping.

To test the effects of extended isolation on the human mind, a medical professional is hired. However, the experiment takes a grisly turn when the chief experimenter decides he has a darker idea: trapping a spirit within the body of a living being.

In the woods of Idaho and New York between the years 2003 and 2011, a humanlike creature was spotted on several occasions. Whoever came into contact with it was faced with enough discomfort and fright that they ended up committing suicide.

In an attempt to win $500, a man takes on the challenge of traversing a legendary haunted house. The rooms get progressively more and more terrifying. In the very last room, the main character comes in contact with what could possibly be the Devil himself.

A tall man who wears a suit, the Slender Man’s purpose is to kill children. One of the most popular online urban legends, it is believed that at times he appears with multiple tentacles emerging from his body. He possesses the ability to hypnotize his victims so as they won’t flee him.

A used copy of Pokèmon Silver is purchased by a college student and it is already 100% completed. While playing he discovers that more and more of his characters are dying. The haunting part is: Pokèmon characters never die.

A group of close friends experience devastating events when one of them goes missing following the appearance of a creepy photograph on his laptop. The horrifying occurrences that ensue are all attributed to someone in their very group.

An ex-intern at Nickelodeon recalls an episode of SpongeBob SquarePants that was lost. He states that the episode involved Squidward Tentacles crying blood while perches on the edge of his bed. The other interns then proceed to bring in the animators into the room for their opinions. The animators find pictures of dead children hidden in the film.

At first unfazed, a woman learns about her son’s new imaginary friend Laughing Jack. However, soon the mother regrets her nonchalance when Jack turns out to be the reason she murders her son.

Now that you know more about creepy online urban legends, you will be thinking twice before traversing the web. The horrors that revolve in the crevices of the internet are far worse than you can stomach. From deadly killers to haunting child murderers to the Devil himself, how many of these do you believe in? Or worse, how many have you actually experienced?