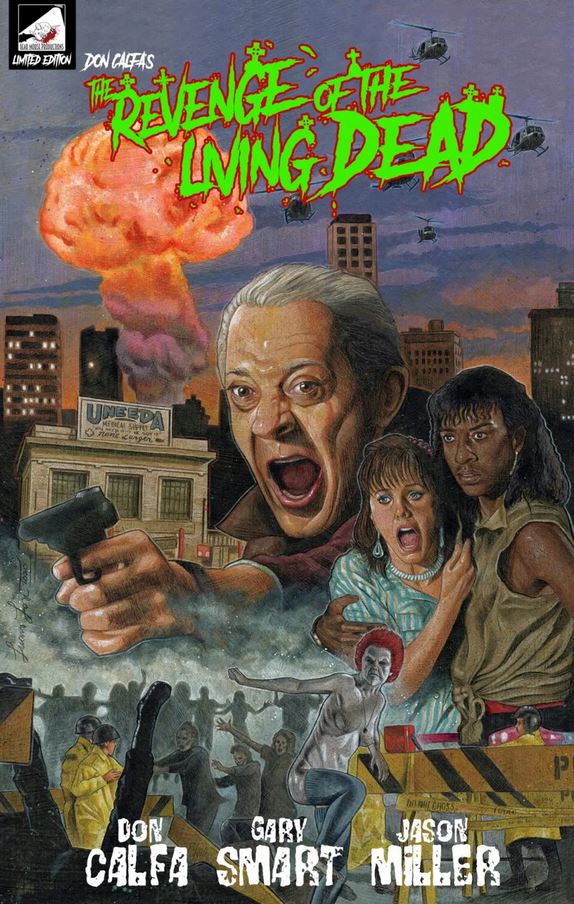 The original 1985 release of Return Of The Living Dead is still considered by many to be one of the best horror comedies to ever have hit the big screen. Starring the likes of Don Calfa, James Karen and Clu Gulager, the action of Return Of The Living Dead kicks off when an experimental military gas is accidentally released on Louisville, Kentucky, which in turn causes the dead to rise from their graves with gory and often hilarious results.

Return Of The Living Dead spawned multiple sequels and made over $14 million at the box office at the time and now we are about to see the release of an unofficial continuation of the film in the form of a graphic novel titled Revenge Of The Living Dead.

Revenge Of The Living Dead actually came to being in 2006 when writer Gary Smart contacted Don Calfa to see if they could rework the original film into the form of a graphic novel. It was worked on for over five years with Christian Sellers and Craig Hutchings and a full version was completed which Calfa took to conventions.

A remake was considered but with Calfa’s declining health the project was unable to be completed.

Smart explains that this reimagining of Revenge Of The Living Dead is an homage to Calfa “For the past 2-years since Don’s passing, Jason Miller and I have been working on the revamped version in memory of Don. This is not a money-maker hence the low price and limited numbers. It’s a tribute to Don and his legacy.”

The novel will be released as a limited edition batch of 350 copies and is available for purchase for £14.99 plus shipping. Revenge Of The Living Dead contains 60 full colour pages on a softback cover and each copy will be signed by writer Gary Smart. International shipping is available.

Check out the promo video for Revenge Of The Living Dead below and pre-order your copy now!