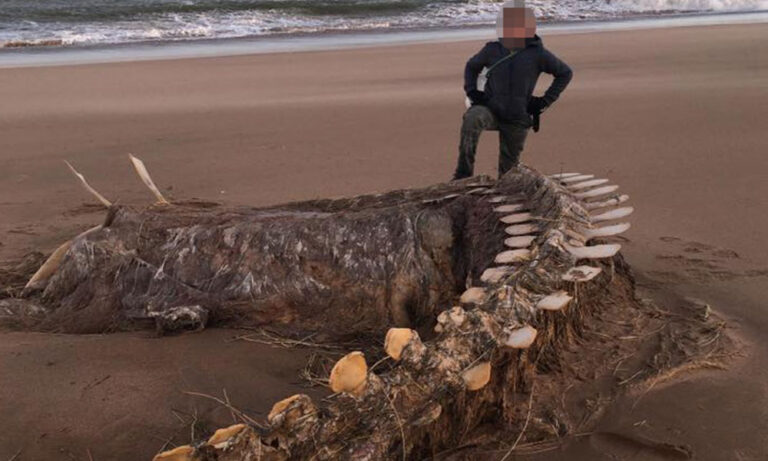 Storm Ciara and Storm Dennis have rocked the U.K. over the past month and along with the bad weather, it managed to wash up the enormous skeleton remains of what locals claim to be the Loch Ness Monster.

The Loch Ness Monster remains to be one of the most famous mythical beings of all time, with reported sightings of the sea-creature dating back to as early as 565 AD!

The picture began trending when it was uploaded to a Scottish-based Facebook page called Fubar News, just a short time after Storm Ciara hit the country with upwards of 90mph winds.

The picture shows a young boy posing over the strangely large carcass which was washed up on a beach alongside debris.

Countless sightings suggest there may be more truth to the legend than first thought, especially with all of the recent encounters with unusual looking underwater creatures.

The most famous photograph ever taken of the Loch Ness Monster was unfortunately later proven to be a hoax, created by carving a monster head on to a toy submarine.

The upcoming photographs are all claimed sightings of the Loch Ness Monster, but there’s no substantial evidence that proves the pictures to be real. (Except for the second and third ones, there’s no doubt in our minds that that’s not Nessie)

Despite these absolute mindblowing pictures that leave no doubt in my mind that the Loch Ness Monster is real, there’s still no solid evidence confirming the beast’s existence.

The Loch Ness Monster has previously been compared to the Greenland Shark, a fish known to grow to 20 feet in length. Although the mythical being may just be an urban legend, the Loch Ness freshwaters in the Scottish Highlands continue to be a tourist attraction for those who still believe in its existence.