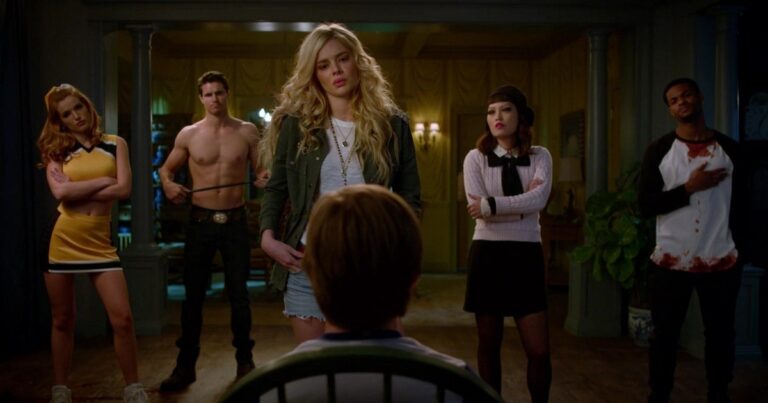 Netflix’s horror-comedy The Babysitter was a hit with audiences back in October 2017, starring the amazing Samara Weaving as Bee the magical murderous babysitter. It’s almost surprising that Netflix has made us wait this long for a sequel, but it has just been confirmed that The Babysitter: Killer Queen will be available to stream from September 10th, 2020 alongside some telling first-look images.

After the original announcement that the film had begun production, it was confirmed that McG returned to the director’s chair for the new feature after overseeing the first film and that we will be seeing Judah Lewis reprise the role of Cole, the first film’s protagonist.

The sequel is reportedly set two years after the occurrences of the first film and will again center on Cole as he tries to “forget his past and focus on surviving high school”. His plans change however when “old enemies unexpectedly return” and “Cole will once again have to outsmart the forces of evil”.

The cast list as well as the movie’s description perhaps creates more questions than it does answers due mainly to what went down in the first film and how they’re going to deal with certain characters returning. Perhaps we’re going to be seeing the supernatural side of the Babysitter universe in more detail?

We hope that the levels of gore, as well as the comedic timing from the first Babysitter film, can be carried over to its sequel, and seeing as it’s in the hands of the accomplished McG that seems pretty certain.

Are you looking forward to the next chapter in the Babysitter saga? What were your thoughts on the first film and how do you think they’re going to be bringing back those that had some pretty gruesome deaths? Let us know in the comments.

Have you seen the trailer for the Terrifier 2? if not check it out here.