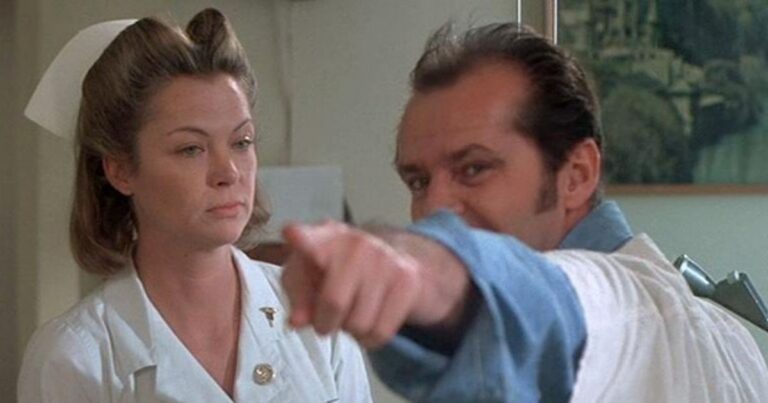 Okay folks, let’s go back in time a few decades. The year was 1975 – almost five years before I would even spring forth into life. A time when movies were a major event for a family night out.

There was no Netflix or Hulu. Moviegoing was a matter of commitment. You spent your cash on a ticket and unless the film is absolutely atrocious, you kept your behind planted in that uncomfortable padded folding chair and hoped to God that annoying kid behind you doesn’t start kicking the seat.

Author Ken Kesey published One Flew Over the Cuckoo’s Nest over a decade prior to 1962. The story is about Randle McMurphy. A quick-tempered conman, gambler, and rapist who is sent to a prison work farm for his crimes. McMurphy uses his skills in grifting to con the prison officials into believing that he is mentally ill and belongs in a hospital rather than a prison.

McMurphy expects the hospital setting to be far more relaxed and struggles to convince staff there that his claims are true by performing acts of rebellion that, while contrived to run the scam, are also true elements of his nature.

The book was later adapted into the aforementioned film, directed by Milo Forman and starring a young Jack Nicholson as McMurphy. His constant foil is Nurse Mildred Ratched, played by Louise Fletcher. Ratched is painted to be a passive-aggressive, by-the-book, nurse who does not tolerate the sorts of tomfoolery that McMurphy is bringing into her ward.

An intelligent and aware character, she suspects he is exaggerating or manufacturing his ailments early on, and thus the stage is set.

This brings us to 2020. Ryan Murphy, (Glee, American Horror Story) has struck up a deal with Netflix to produce an 8 part mini-series that tells us who Mildred Ratchet was before her days as the Chief Registered Nurse in charge of McMurphy’s ward. If that’s not enough to get excited about, American Horror Story Alum Sarah Paulson is slated to portray the nurse, in this aptly titled feature, simply called Ratched.

It’s fair to say that Ratched became the culturally iconic character from the film. Paralleling fictional foes like Full Metal Jacket’s Drill Instructor Hartman (R. Lee Ermey) – Ratched’s character overtook the main lead for her memorable quotes, actions, and mannerisms. Ask anyone today if which name rings a bell, Nurse Ratched, or Randle McMurphy, and you’re sure to ring more bells with the nurse than the narcissist. Like Ermey, it was Louise Fletcher’s expertise in the performing arts and skill as a thespian that allowed her to capture the director’s view of the nurse and bring it not just to the film’s expectations but into a stratosphere all its own.

A great opportunity to set the record straight

If I may editorialize for just a moment – my hopes for this series are that it explores that very real fact that McMurphy (although remembered often as the protagonist of the film) is in fact a horrible human being. Sure, the rambling-gambling man could be a fun trope to get behind, but let’s not forget that he is also written as a rapist (having raped a 15-year-old girl) and is a constant chaotic element who likely did far more harm to any of the mental patients he “befriended” as he rolled through yet another batch of lives to ruin in the name of getting his own jollies.

Ratched, while perhaps lacking a bedside manner that could be called therapeutic, was still at the end of greater good in both the book and film. She realized that a convicted predator was trying to eschew accountability by manipulating a system for those who lacked the very impulse control that he himself ignored in his pursuits. I’m hoping to see her portrayed not from the perspective of her cinematic reputation (calling a woman in authority “Nurse Ratchet” to imply she was humorless or apathetic was a pretty common insult when I was growing up) but rather as a real human willing to endure the difficulties of nursing school and the male-dominated, chauvinist medical field of the 1950s/60’s to seize her passions and goals.

With the talents of Ryan Murphy and Sarah Paulson behind the wheel, I can assume positive results. They’ve never let me down before.

Ratchet is set to premier September 18th on Netflix.