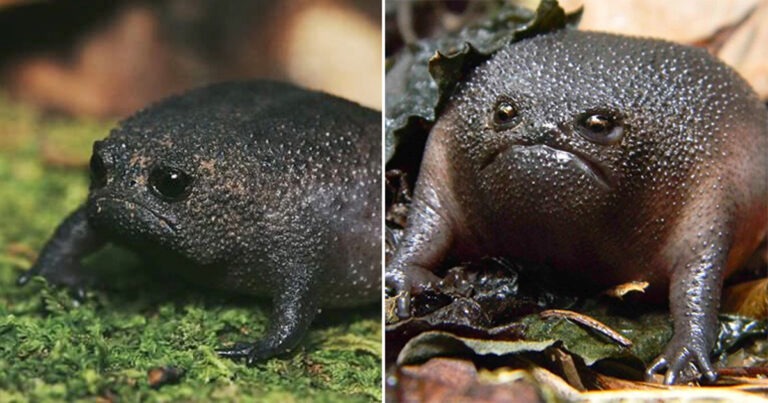 There are plenty of animals who look or act aggressively, especially when there are around people. However, the Black Rain Frog also known as Breviceps fuscus may take the biscuit, as it’s arguably the world’s grumpiest frog. While it’s not intentionally making the face – that’s how it normally looks – it hasn’t stopped fans of the frog from giving it the label.

A burrowing amphibian, the frog is native to Africa’s southern coast, though small populations can be found in a few other areas. Aside from the frog’s resting grumpy face, the species has a few other characteristics that make it quite interesting. One of the more obvious, given that it’s a burrowing species, is that it usually lives about 150 millimeters underground.

However, that doesn’t mean that that’s the most interesting piece of information about the Black Rain Frog. That would perhaps go to the females of the species, who are known to secrete an unusual substance out of its back during mating that ensures the males won’t fall off. With that in mind, many people have wondered why it looks like the world’s grumpiest frog.

There is one possible explanation, for the males at least; once eggs have been laid, the males are forced to stay in their burrow to look after them. Needing to stay underground for so long, most likely by themselves, would make anyone a little bit grumpy. According to a few reports, the frogs aren’t as aggressive as they might look.

You could say that they’re mainly full of hot air. The main reason for this is that, when threatened, the Black Rain Frog will inhale a lot of air to make his body bigger. This also makes them look somewhat like a grumpy balloon, but it may be a decent defense against certain animals.

When in their burrow, this also has the advantage of ensuring that they can’t be grabbed and pulled out.