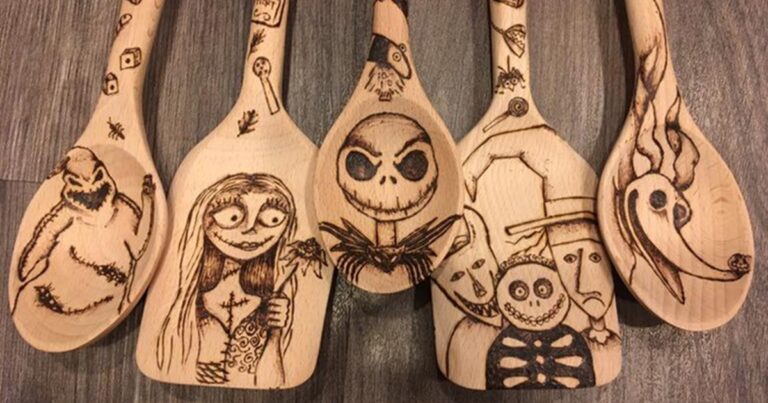 Since being released in 1993, Tim Burton’s The Nightmare Before Christmas has received critical and commercial acclaim. This was enhanced in 2006 with its first re-release, which ended up making the movie a cult classic. Alongside this, it’s seen several more re-releases, with this eventually making it the first stop-motion film to be fully converted to 3D.

During this time, fans of the movie have tried to get as much merchandise and memorabilia associated with the film as possible. It’s also led to countless people getting tattoos inspired by it over the years, with some going great and others not so great. However, one of the newest additions to this is a set of spoons that the majority of fans should love.

Currently available for a discounted price of $34.95 plus shipping, the spoons are approximately 15.5 inches long and one inch thick. They also have a natural, food-safe finish, and shouldn’t scratch any pots or pans when you’re cooking. Available in a set of six, each spoon focuses on a different fan-favorite character, such as lead character and mayor of Halloweentown Jack Skellington.

One of the spoons also features a silhouette of Jack and Sally as they profess their love to each other, which is one of the more popular scenes in The Nightmare Before Christmas. Each of the characters is beautifully hand-carved and features a variety of decorations either inspired by or taken directly from the film.

The movie focuses on Jack Skellington, also known as the Pumpkin King, as he grows weary of Halloweentown’s yearly celebrations. However, he soon stumbles on portals to Christmastown and a range of other holiday-inspired places. Over the course of The Nightmare Before Christmas, he quickly becomes reinvigorated while falling in love with Sally, one of the other leads in the film.