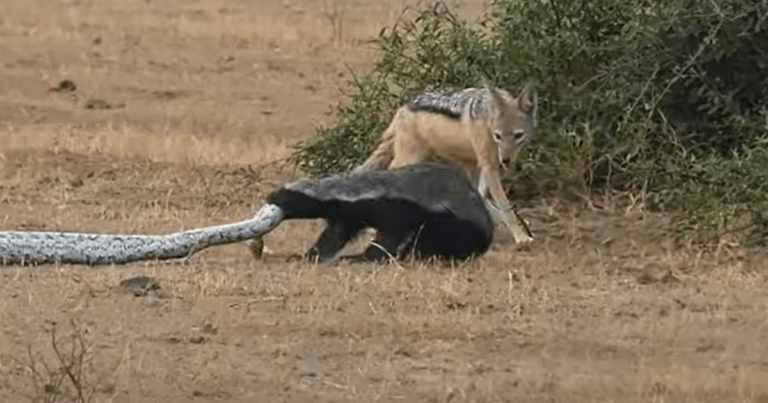 When it comes to the pecking order in the animal kingdom, there are arguably a few species that hold the crown for the category of not to be messed with. Some would say it’s the ferocious lion, the apex predator alligator, or the understated hippopotamus but there aren’t many who would want to come up against the ever aggressive honey badger.

So it is all the more strange that at the start of this video taken by safari tourist Roselyne Kerjosse that the honey badger in question seems to be on the losing end of a fight with a fully grown python.

That is until two over-eager jackals come to see what the fuss is all about and to maybe get some food for themselves.

Pythons are constrictors who ambush their prey before squeezing their victims so tightly that the blood simply cannot pump around their body, causing cardiac arrest. The resilient honey badger was in the middle of one of these heartstopping struggles when it was saved by the jackals.

Honey badgers have not been labeled as the world’s most fearless creature for nothing, and as seen in the video the now slightly deflated animal instantly switches to attack mode.

Spoiler alert: It doesn’t end well for the jackals, and it ends even worse for the snake.

After the snake is quickly dispatched, a tug of war over the now-dead reptile’s corpse begins. Not only does the honey badger successfully drag its dinner back to its den, but also fends off the attacks of the second jackal whilst doing it.

So the moral of the story is when you come up against a creature that has a near impervious hide, a bite that can crush the shell of a tortoise and a bad attitude that would put the grumpiest of big cats to shame, maybe just go looking for dinner elsewhere.