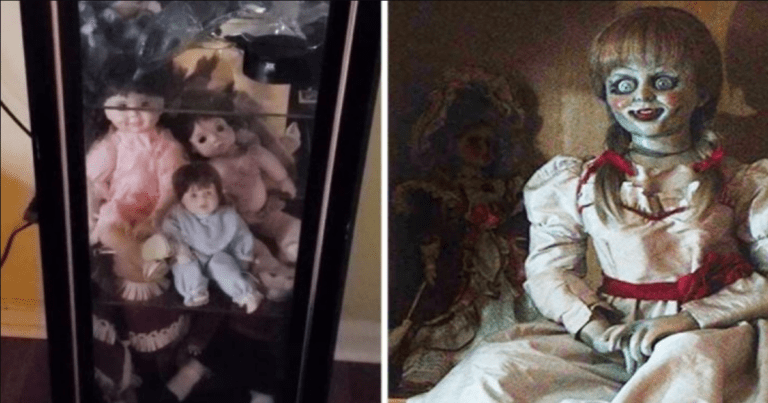 No matter if they’re harmlessly sitting on display at your home or you’re watching one as they try to viciously murder victims on your TV screen, dolls are often found to be incredibly terrifying by many.

While the majority of people tend to find dolls rather cute and innocent, this video shared by Chad Gassert shows three dolls taking on a life of their own and moving inside a glass cabinet whilst he was home alone.

The man-made sure he recorded footage of the creepy dolls before eventually running out of the room in terror.

After sharing the video online, viewers urged the man to leave his Ohio, US, home immediately, while some even claimed they could see a ‘pair of eyes’ lurking behind the dolls as they moved.

During the video, along with the movement of the freaky dolls, a pile of clothes seemingly fall to the ground without anybody near them as the man began scanning the rest of the room.

According to Chad himself, this was not the first time he had seen the dolls displaying a supernatural presence, as the man claimed he previously captured them traveling across the room earlier in the year.

The incident has since led to Chad looking for the opportunity to leave his home for a new start, hopefully, this time without haunted dolls terrorizing his home.

Below, you can see the controversial video.

The event has caused a big stir online and many have drawn comparisons from Chad’s dolls to the infamous Annabelle, a doll reportedly so haunted that it had to be stored in a safe occult museum.

Annabelle became so well known that it began a horror-movie franchise.

What did you think of the video? Make sure to let us know your thoughts in the comments.