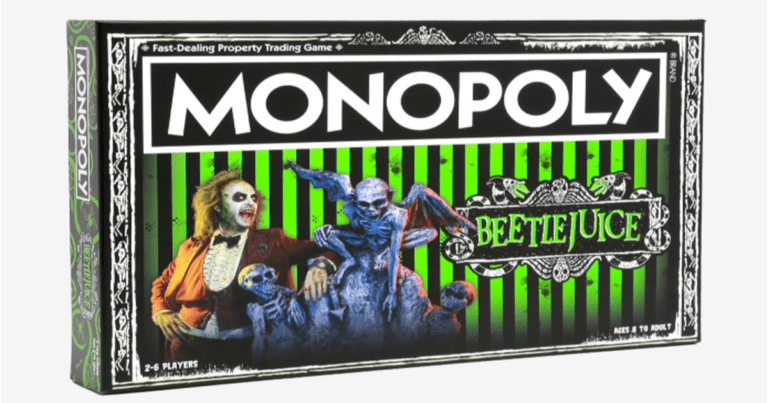 When it comes to the ever-growing list of monopoly games we always wonder where board game creators Usaopoly are going to go next. From Garbage Pail Kids to Godzilla to Nightmare Before Christmas, these officially licensed products are always of the highest quality and are excellent additions for both collectors and boardgame enthusiasts alike!

And now it seems that it is Tim Burton’s turn to be immortalized in the form of the game which has both made and destroyed friendships and families.

Available to buy at Amazon the product description urges that “Before you call his name three times, work your way through the strange and unusual afterlife of MONOPOLY®: Beetlejuice!”.

The game includes countless references to the film and is extremely well designed in service of the 80s classic. The playing pieces are modeled around key items from the movie, such as the Handbook for the Recently Deceased, Charles Deetz’s binoculars, the wedding dress, the skeleton key, Beetlejuice’s tombstone, and Lydia’s camera.

Instead of Chance and Community cards, you will get the appropriately refashioned Haunting and Occurrence cards alongside Haunted Houses and Paranormal Museums which replace the normal houses and hotels.

On top of this, the money of the game has been completely redesigned to fit in with the Beetlejuice aesthetic.

It wouldn’t be a Beetlejuice game without some disputed title deeds that you can use to show ownership of the spaces of the board which is now replaced by some familiar faces as you “Buy, sell, and trade your favorite dark comedy characters such as Lydia, Delia, and Charles Dietz, Adam and Barbara Maitland, and the irreverent bio-exorcist himself.”.

One satisfied customer exclaimed that it was “by far my favorite edition…all the Beetlejuice details in every part of the game make it so much fun” with another stating that if “you are a Beetlejuice fan you won’t be disappointed”.