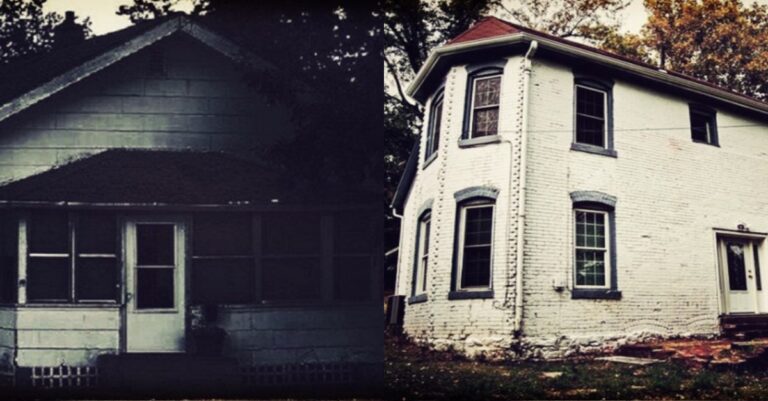 While science has given us extensive ways to study the supernatural world, this has not stopped the unnatural and unexplained occurrences. There are plenty of paranormal incidents that are witnessed in all parts of the world even to this day. It was long believed that ghosts and demonic possession were a thing of the dark ages. The following modern day hauntings prove that sometimes science fails to explain things in its own wake.

The Simpson House is situated in Hanover Township, Pennsylvania, on Maple Avenue. Tom and Deanna Simpson lived in the house for seven years until they decided to get help for the hauntings. According to them, there were at least five ghosts and one demonic entity in the house. When Fox 43 reporters arrived at the property to interview the family, the cameraman was scratched violently. As the interview was ongoing, a motion-triggered camera captured a dark shadow in the basement.

Deanna claims that the start of the hauntings was when she had a dream of two men standing above her in her sleep. Only she woke up to find it real. She also witnessed reflections of a blonde woman lying on the floor in the bathroom mirror. Afterwards they experienced weird incidents such as doors shutting on their own and strange crying noises from the bedrooms. She also witnessed a 7-foot shadow which she believes was a demonic entity. Numerous attempts from paranormal investigator and priests were futile and the house remains haunted to this day.

The Brownsville Demon House is located on 3406 Brownsville Road. Bob Cranmer have a first-hand account of the hauntings that took place in there. The history of the house extends all the way back to the early 18th century. According to the local legends, a mother and her three children were slain by Native Americans near Fort Pitt. The killing itself occurred on the land on which the house was later built. As if that was not enough, a later tenant named Dr. James C. Mahan was fabled to perform illegal abortions in the house. The series of dark events that eventually fueled violent paranormal events which the Cranmer family experienced when they in by the 1980s.

Bob Cranmer described the place as his “dream house.” On the family initial visit to the house, their oldest son, Bobby Jr., walked down to the basement and was later found hyperventilating on the stairs. Bob’s wife, Lesa, also stated that the house was making her uneasy but she was unsure why. When Bob inquired if anything abnormal had taken place on the property from the realtor, he was told that a Catholic mass had been performed in the living room multiple times. Bob later discovered a buried box in the front yard which contained Catholic relics. When he called up the previous owners, they simply informed him to put the items back in the ground.

Soon the family began to experience moving furniture, flickering lights, bad dreams, unknown footsteps and even strange noises. A presence was felt around the house accompanied by an odd rotten smell.  Religious artefacts were bent and destroyed around the house. Upon seeking help from the local church, the family noticed the walls oozing blood. It was not long before they realized the house was possessed by a demonic presence and not in fact haunted.

Cleansing the house from the evil spirits took two years to complete. During this duration, Bobby Jr. and Lesa were hospitalized for mental instability. By 2006, the house was completely cleansed.

One of the most cases of hauntings in Kansas is the Sallie house haunting. Located in Atchison on 508 N Second Street, the house is said to house evil spirits as well as lost souls. The house’s name even comes from the ghost of a young girl named Sallie. She can be frequently seen warding visitors away from the horrors that dwell within.

Originally built by Michael C. Finney in 1867, it remained occupied by the family until the mid-20th century. It was opened up for boarding by the 1950s, but few people stayed for long. Then Ethel Anderson moved in and stayed until she passed away in the early 1990s. Tony and Debra Pickman bought the house after. However, soon after the couple moved in they started experiencing supernatural incidents.

From unknown noises and sounds to dark shadows, floating objects and furniture moving about, the couple even started noticing physical abuse marks on their bodies. Following the birth of their child, the activities increased and they sought the help of paranormal investigators. However, everyone who tried to exorcise the house or ward off the demons was attacked in the house. In 1992, the Sallie House haunting appeared on Sightings and made national news. The crew was even attacked while filming the place.

After an investigation, it came to light that other than spirits, demons also resided in the house. Tony and Debra moved out in 1994 as they were unable to stay any longer. The house remains haunted till today.

The Possession of Latoya Ammons

In Indianapolis, a resident reported being attacked by forces within her home. Captain Charles Austin of the Gary Police Department thought it was all a hoax at first. But, it was soon discovered that there was truly something sinister about the Ammons home. In fact, the Department of Child Services wrote down 800 pages of official record on the incident. This comes alongside first-hand accounts by police officers, priests, family members and psychologists.

The Ammons family moved into their new home in November 2011 on Carolina Street in Gary, Indiana. However, they noticed large black flies swarming around the screened porch despite the cold winter. Soon they began to hear unexplained sounds in the house. Doors could be heard opening and closing despite being locked and footsteps were heard around the house. They even witnessed shadows and footprints. On March 10, 2012, the family were woken up early morning by their daughter’s screams – her friend who was sleeping over was found unconscious and levitating above the bed.

Local churches were called to cleanse the property but no one stepped forward. Being financially unable to shift, Latoya constructed an altar in the basement with Jesus, the Bible, Mary and Joseph figured. She also burned sulfur and sage in the house, drawing smoke crosses. It did not help. Witnesses describe the possessions as children’s eyes bulging, their faces spreading into grins and their voices deepening. The doctors left it all to hallucinations and delusions. A medical check-up on the children found the children of sound mind and health. But, that all changed when a nurse witnessed the eldest son climbing up a wall on all fours backwards.

Inspection of the house by police officers led their equipment to malfunction – audio devices stopped recording, cameras captured odd anomalies. In April 2012 Reverend Michael Maginot was requested to exorcise the 9-year-old boy. It was the first ever exorcism to be authorized by a bishop of the Catholic Church’s Diocese of Gary. After performing the ritual followed by months of assistance from psychologists, the family was finally freed from the possessions and torment. Latoya was also restored full custody of her children.

In 2016 the house was demolished and since then no further reports of paranormal activity have surfaced.

Patricia and William Bean moved into their new home in Maryland with their 3 children in 1970. However, they were not the only inhabitants. Strange noises could be heard during the night, doors opened and closed on their own and shadows could be seen entering and exiting rooms. They even decided to name the spirit “Henry” to reduce the horror it embodied in them. But the incidents just kept getting more violent in nature.

At one point, their daughter Patti, felt someone gripping her foot and she had red marks around her ankle. Patricia woke up one night to the feeling of hands choking her. Sometimes she would even be thrown around violently or levitated off of the bed. The paranormal incidents led William to develop a drinking problem which broke up the marriage. He soon left the house and his ex-wife and kid were now at the mercy of the spirits.

By 1975, as Patricia’s health faltered she was advised to leave the place. Instead, Patricia had a medium perform a séance. Turns out there were four entities living side by side in the house and they even left a message: “join us or die”. By the end of the session, the medium as terrified to the point of fleeing. Following the destruction of a family portrait, Bill, the son, sought the help of an evangelical relative. They attempted to use faith to ward the spirits off but it only calmed down the activity for the time. A priest was then called to bless the house and urged the family to leave. They insisting on staying.

Then the paranormal activity resurfaced and the family finally left. However, creepily enough the demonic presence followed them until Patricia’s death of kidney failure in 1981. Today, the house is open for visitors and is a popular destination for paranormal tourists.

These documented cases of possessions and hauntings leave us wondering if science can ever dispel the theory that there are other worldly beings living alongside us. From demons who follow people around till their death to incidents that leave people traumatized and in need of professional help, it is obvious that there is far more to demons than we already know.