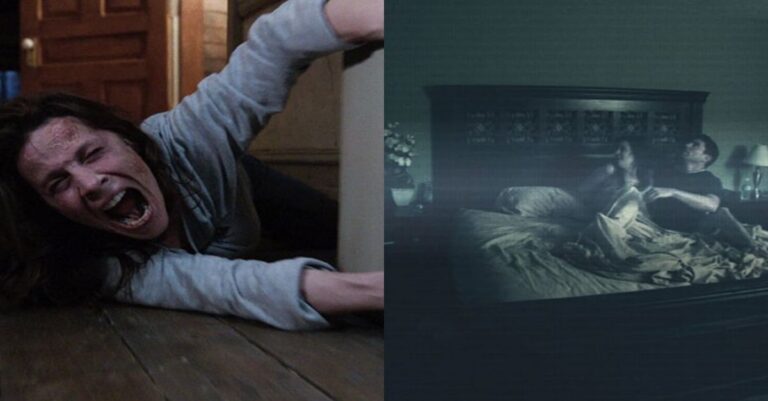 Horror movies are meant to be terrifying. However, when horror movies are about haunted houses, the terror is on a whole other level. When demonic spirits invade your abode, there is absolutely no escaping their curse. The following list of haunted house movies will have you shuddering in the safety of your own home wondering if anything is even safe anymore.

The 1959 horror novel “The Haunting Of Hill House” by Shirley Jackson inspired the making of this movie. The movie’s plot centers round the Hill House and the spirit of the owner Hugh Crain, alongside his wives, haunting the abode. In order to determine whether a paranormal presence actually exists in the house, a parapsychologist recruits two young women, Theodora and Eleanor, to stay in the house. The horrors brought to life on the screen are a masterpiece. It is truly a 1963 masterpiece.

Rick and his sister Pamela spotted a lucrative offer on an abandoned mansion on the coast of England in Cornwall and decided to move in. It was not long before the unexplained occurrences began. From disembodied weeping to unexplained chills, the house is a creepy and haunted one. Following a séance, the spirit’s identity comes to light. The 1944 movie is the first film to portray ghosts as an eerie, terrifying and real phenomenon unlike other films of the time that portrayed them for comedic effect.

The 1977 Japanese horror film has a haunted house which is in fact a monster which swallows down a schoolgirl and her friends. The film is big on fun house scares and crazy imagery. It got wide release in the US in 2009. The film features demonic possession, reanimated body parts and haunting inanimate objects seeking blood. The idea behind the house-monster came when the Japanese studio head decided to recreate the success behind the movie “Jaws”. He discussed the idea with his teenage daughter who shared her own nightmares and fears and hence Hausu was born.

The incredible price on the house in the 1982 film directed by Tobe Hooper (director of The Texas Chainsaw Massacre) was the result of a desecrated burial ground beneath. The Freeling family buy a new house that was built on top of a cemetery. The angry spirits emerge and proceed to kidnap the family’s youngest daughter, Carol Anne. She is then transported into the spirit realm. Multiple disturbing scenes are featured such as a closet vortex, a clown doll, a backyard swimming pool hole and a closet vortex. The film is even perceived to be cursed.

The Conjuring, is a 2013 horror film featuring the Perron family and the evil spirit that their rural home in Rhode Island is haunted by. Completely fed up of the paranormal activity around the house, they seek help from paranormal investigators: Ed and Lorraine Warren. The plot of the film employs fictitious occurrences but it is fabled that it is based on a real story. Ed and Lorraine Warren are indeed real people and they actually attempted to exorcise the Perron family’s house. Their efforts only worsened the paranormal occurrences and even when the Perrons sold their property in 1980, and moved to Georgia, the evil spirits followed them.

Looking back at the 2007 horror movie, it is easy to note all the silly tricks and simple scares. However, when you watch the film all by yourself in the privacy of your home, the terror truly sets in. The movie although highly amateur in production relying on classic scares, eye tricks and shake home videos is a true thriller.

This 2001 film features otherworldly scares as well as the stunning Nicole Kidman. The little girl under the sheets who transforms into a grandma, an eerie English manor after World War II and a mother who insists her children suffer from sensitivity to sunlight. Blending horror with psychological thriller suspense, the film is wonderfully woven to create a masterpiece.

The spirits swarming the hotel from the creepy bartender to the lady in the tub to Delbert Grady are what push Jack to the limit. Despite being unhinged to begin with, it is apparent that the spirits really take their toll on him. Stanley Kubrick did a great job with the adaptation although Stephen King did not think so. However, fans agree that The Shining is easily one of the most horrifying movies out there.

The Changeling is based on real events experienced by author Russell Hunter while residing in Denver, Colorado, in the Henry Treat Rodgers Mansion. A story of horror and revenge, the film outlines the spirit of a young boy in the mansion who has some unfinished business. When Russell learns of him and his purpose, he knows justice needs to be served.

The Lutz family claimed to have been attacked in their family home by supernatural forces. The movie brings to light the paranormal activities that occur such as locked doors, oozing walls, imaginary people and phantom strangulations. Although not many people fully believe this story, the history of the house speaks for itself. The previous owners, Ronald DeFeo, Jr., who lived in the house a year before the Lutzes, shot and killed six members of his family. The house is on the market now and can be purchased for only $850,000.

This Spanish 2007 horror film discusses the story of a haunted orphanage. Laura revisits the orphanage of her youth and seeks to refurnish it as a home for disabled children. But things turn deadly when her adopted son disappears. She soon learns that the orphanage is housing child spirits. She tries to contact them and soon falls into a game of hide-and-seek.

There is truly no place like home – especially when demonic spirits have invaded it. No one likes to spend the night in a scary house but why do that when you can watch chilling haunted house movies and instead fear the depths of your very own abode.