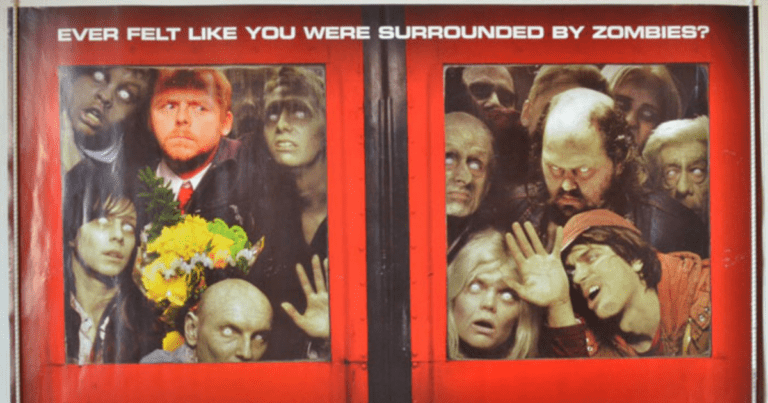 Due to the ongoing pandemic, our current living situations and the not so clear future what lies ahead of us has eerie similarities with the beginning of an apocalypse.

The abandoned streets now only occupied by stray animals and wildlife, the desperation and hoarding of products (I’m talking to you toilet paper trolls), and the closing of stores and markets are just a few ways that the world as it is known today could be mistaken for the start of a zombie movie.

A photo has now surfaced which has been closely compared to Edgar Wright’s horror-comedy, Shaun of the Dead, leading it to trend on social media.

The photo of Ohio residents urging the state to re-open businesses after their closure after being deemed non-essential is the post that shares a creepy comparison to a Shaun of the Dead movie poster from 2004.

The pictures, which can be found below, show a group of protestors tightly pressed up against the statehouse doors, where they can be seen yelling to get their opinions heard. But when put side by side with a Shaun of the Dead poster, the resemblance is uncanny.

For those of you who aren’t aware, Shaun of the Dead is a British movie from 2004 which follows a man whose uneventful life, disrupted by the outbreak of a zombie apocalypse, is forced to go through a series of challenges as he urgently tries to get his friends and family to the Winchester pub so they can just “wait for all of this to blow over”.

Simon Pegg and Nick Frost are the famous duo from the movie, and in case you missed it, you can check out their hilarious message for everyone in lockdown, HERE!

How creepy did you find the comparison? Let us know your thoughts in the comments.